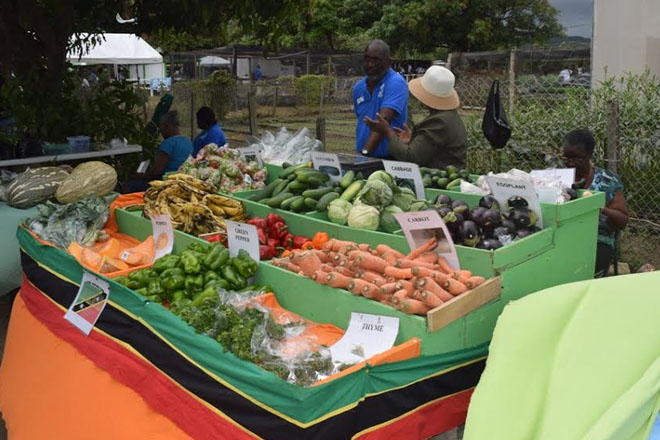 (SKNIS): Melvin James, Director of the Department of Agriculture, zeroed in on the theme for Agriculture Open Day 2016, which runs for two days from Thursday, April 21 to Friday 22.

While appearing on the Government’s weekly radio and television programme “Working for You” on Wednesday, April 20, James explained the theme “Engendering Resilience to Deal with Global Realities” and said it is timely and very interesting.

“First let me take it from the very end, global realities. We often discuss climate change; when we talk about adversities we put it in the context of what is happening with climate change and that is true, that is very important because we know that there are unseasonal rains, unpredictable rainfalls, unpredictable drought and dry periods,” said James. “There has been increased incidence of pest and diseases and all of that affects production especially in the context that our production is mostly what you call open field.”

He said that the open field production that exists in the Federation is subject to the elements of the weather as opposed to protected agriculture. He added that global realities became a part of the theme because the department is admitting and acknowledging that the agriculture issues and challenges faced are not only related to climate change.

“But we are looking at global factors that affect us for example, free trade,” he said, while adding that a number of islands including St. Kitts and Nevis boasted a great deal of protection, special, different and preferential treatment in the past. “A lot of these treaties, a lot of these arrangements have gone and are going out of the window. It’s a new playing field that we have to react to and so while climate change is important I wanted to look at the wider picture that is why we said global realities.”

Not forgetting the first part of the theme that deals with resilience, the director said that it too had to be taken into consideration.

“We know resilience; the flexibility, the ability to recover, to come to the fore, and therefore the theme is admitting that we have the awakening, the inspiration and the creativity as it were to deal with all of these adversities and not go under, not capitulate, in fact, even do better than survive,” said James. “We want to be able to succeed and that is why we want to say that from the beginning we are aware of these and the plans and programmes we are putting in place, take all of these into bear and it is only at that way we are in fact believing and knowing that having looked at the total picture we can move forward.”

This year’s open day is different to that of previous years with additions such as agricultural health where nurses will be on ground to vaccinate. There will also be a focus on agricultural technology such as the use of renewable energy and drones in agricultural practice.

Other highlights of Open Day 2016 will include expanded food courts, mechanical bull, and bouncing castle for kids and lots of educational games. Live entertainment will be provided by Nu Vybes Band, King Lala, Faybo and Urbman, Sankofa Macabee and much more backed by Limitless band.

On exhibition as well as on sale will be fruits and vegetables, meat and meat products, fruit trees, agro-processed items, agricultural chemicals, fish products, ornamentals and different types of animal feed.