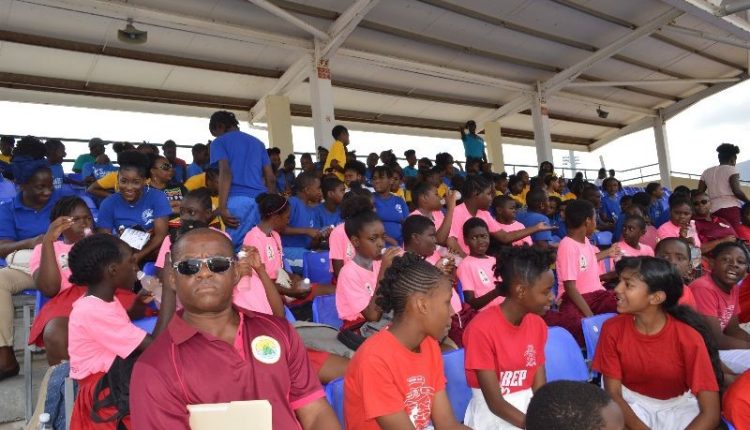 Basseterre, St. Kitts, May 24, 2019 (SKNIS): The Department of Sports, on May 24, launched the Sam Nariani Primary School Cricket and the Kanchan Nariani Netball Competitions at the Warner Park Cricket Stadium, where, for the first time, all 17 primary schools in St. Kitts will be participating.

“Of course, with all of the schools participating, we expect this year’s competitions to be even more competitive than we have had before,” he said.

He stated that apart from being more competitive “you need to recognize that you the young people, you are the foundation on which this nation is being built.”

The minister said that in terms of netball and cricket, the youth represents the future for both sports in the Federation.

Minister Richards commended the coaches for doing an outstanding job with the children.

“On behalf of the government and behalf of the Ministry of Education, Youth, Sports and Culture, I also extend our gratitude to the coaches,” he said.

The minister thanked Sun Island Clothes for its continuous sponsorship of the two sporting disciplines. This is the fourth consecutive year that they are sponsoring the competition.

“To the sponsor, Sun Island Clothes, I am indeed grateful that once more you have come forward to sponsor these two particular competitions,” he said. “If it’s one thing that we can say about Sun Island Clothes is that you are indeed dedicated towards the development of the young people here in the Federation. Year after year, you have come forward to sponsor these events.”

The minister mentioned that the company not only gives financial assistance, but also assists in the making of the uniforms.

After the launch, the participants paraded through the streets of Basseterre. The parade culminated in the Independence Square.

The competitions will start next week Tuesday, May 28, and will be held every Tuesday and Thursday until July 4. There will be a break for the children to take their Test of Standards.