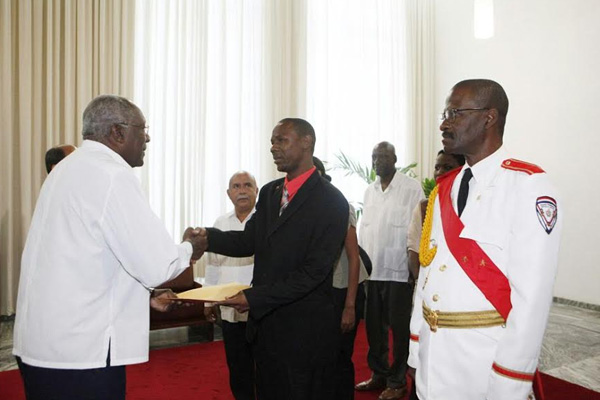 Mr. Douglas completed the two-stage procedure when he presented his credentials to Vice President of Cuba, His Excellency Salvador Valdes Mesa in Havana.

Ambassador Douglas, who was accompanied by his wife, Kenesha, used the opportunity to reassure the Government of Cuba of the Federation’s continued support in strengthening the existing good working relationship between both countries.

He singled out the continued assistance from Cuba in the several areas including agriculture, education, health and sports.

Ambassador Douglas also praised Cuba for providing scholarships to St. Kitts and Nevis and over 200 nations around the world.

He also reaffirmed that St. Kitts and Nevis will continue to call for the lifting of the United States Trade Embargo.

In closing Ambassador Douglas again expressed the Federation’s thanks and deep appreciation to his predecessor, His Excellency Ambassador Cedric Harper, who served for several years as Non-Resident Ambassador to Cuba. Mr. Harper, who is based in Kingston, continues to serve as St. Kitts and Nevis Ambassador to Jamaica.