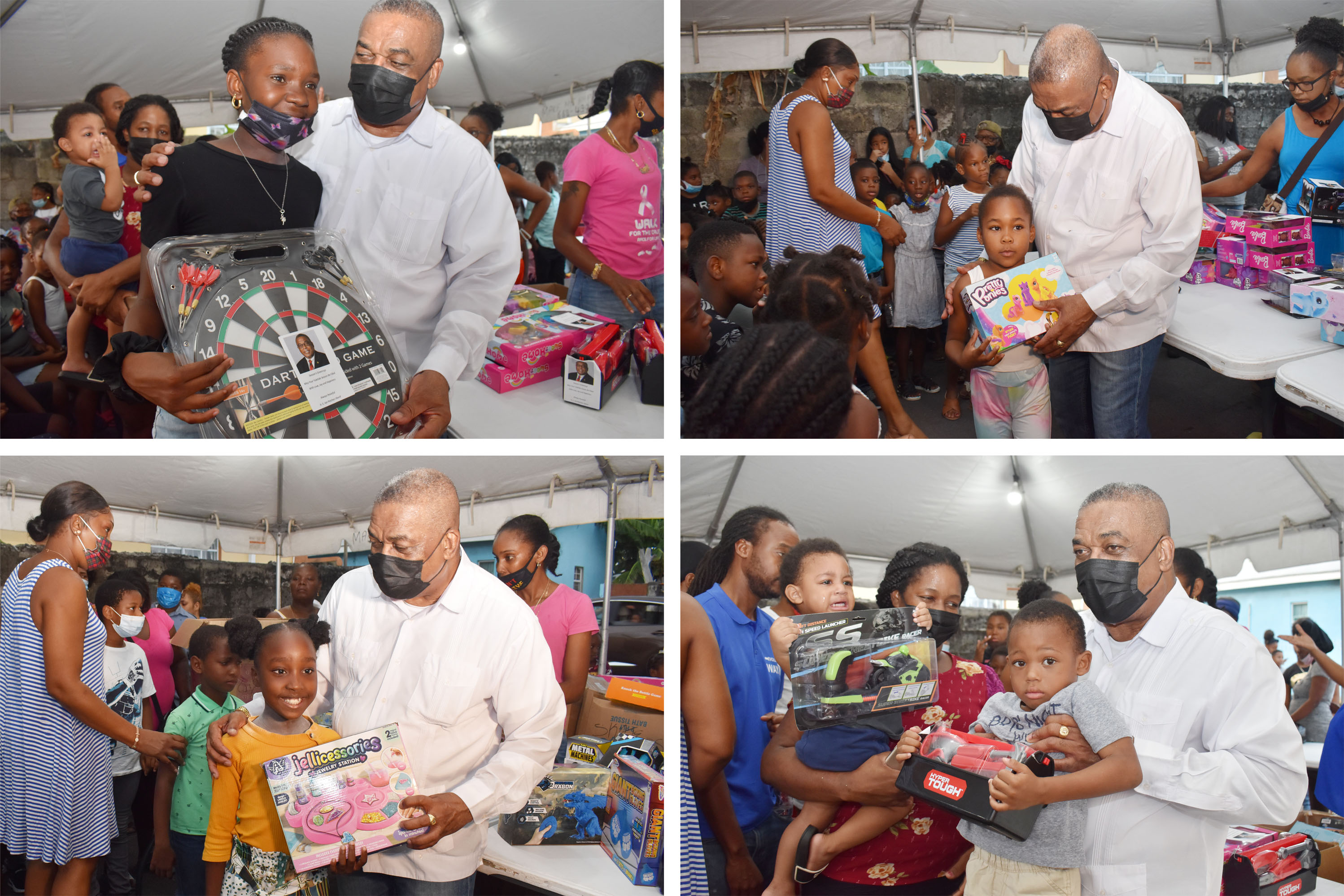 BASSETERRE, ST. KITTS, December 10, 2021 (MMS-SKN) — A ministry started by the Federation of St. Kitts and Nevis’ Permanent Representative to the United Nations, His Excellency Ambassador Ian Patches Liburd, long before he entered into elective politics is bringing early Christmas cheer to the residents of East Basseterre.

It was Christmas come early for the children of St. Christopher One on Wednesday, December 8 when the upper section of Stainforth Street, where Ambassador Liburd has his constituency office, was closed to accommodate the distribution of Christmas toys to the many enthusiastic children most of who were accompanied by their parents or older siblings who turned up.

“Today was a continuation of my Ministry of Giving,” observed His Excellency Liburd at the end of the highly successful event. “I have had this ministry ongoing long, long before I was in politics. This is what we call Christmas toy distribution to the less fortunate kids in particular in the constituency. It is something I have been doing long before even entering into elective politics.”

Children were elated to receive a wide array of toys, some specific to older boys and girls that included roller skateboard and dartboards among others, and general toys for the younger ones. All of the toys had a picture of the Ambassador printed on the outer box with a message below it: ‘Season’s greetings. May your yuletide season be filled with love, joy, and happiness. Always peaceful, H.E. Ian Patches Liburd’.

“Today was specifically for children,” he noted. “They took it well – they are all so elated that some did it twice. We had enough toys to distribute to everyone – that is most important. When you would have come and seen the crowd looking pretty big, but we had enough to satisfy everyone and that is what is important to me.”

The Ambassador pointed out that has some school supplies which he intends to deliver as well, but the advice is that he holds them instead of giving them at this particular time. He will however continue with the Ministry of Giving on Friday, December 10 with the distribution of vouchers to approximately 200 single mothers within the constituency.

“So even though I am out, so to speak, out on the fringes I still continue my Ministry of Giving,” he commented. “It is heart-warming to bring cheer to the children in particular and their parents by extension at a time like this, the Yuletide season, especially in a period like this one in which we are suffering from the coronavirus-induced pandemic – things, are hard for the people, some don’t have jobs.”

According to Ambassador Liburd, since he returned home for the Christmas vacation, he started the distribution of what he called ‘non-pharmaceutical tools’ that included hand sanitisers and masks. These have been delivered to Beach Allen, his alma mater the Tucker Clarke, and Immaculate Conception Catholic Primary Schools, and the Basseterre High School, while outstanding is the Washington Archibald High School. He also delivered the ‘non-pharmaceutical tools’ to the Newtown Health Centre.

“We have spread wide and far throughout the community so we can reach everybody, and that is what we did,” said Ambassador Liburd. “We are in the process of delivering three hundred food baskets – I call them mini-barrels. We did in fact on Sunday (December 5) distribute to 24 tenants at the Wellington Road Condominium Project who we each gave a gift and a food basket.”