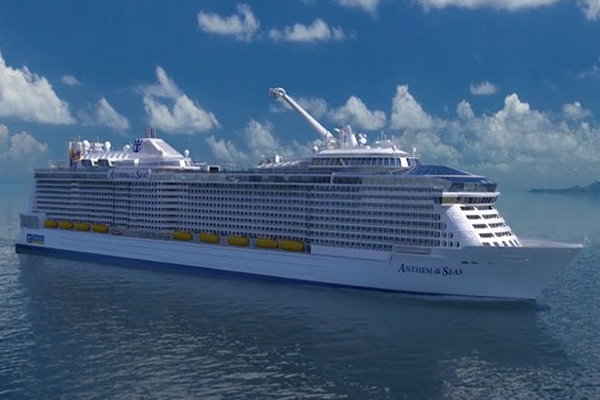 Basseterre, St. Kitts (CUOPM) — Although the 5,400-passenger Anthem of the Seas, is still under construction, Royal Caribbean Cruise Line has penned in St. Kitts’ Port Zante for the 2015/2016 Cruise Ship Season.

The Anthem of the Seas, the second of three 167,800-ton next-generation Royal Caribbean cruise ships, will launch spring 2015 with 2,090 cabins including 373 virtual balconies — inside cabins featuring real-time views of the ocean and destinations.

According to the RCI website the Anthem of the Seas will make its inaugural call to St. Kitts during the 12-night Southern Caribbean Cruise which departs New Jersey on November 10th 2015 with stops in Puerto Rico, Barbados, Martinique, St. Kitts and St. Maarten.

The Quantum Class fleetmate Quantum of the Seas which sailed November 2015 and made its inaugural call to St. Kitts on December 8th 2014, and a third, yet unnamed ship will debut in mid-2016.

The Quantum Class is bringing with it innovation, including a skydiving simulator and North Star, a jewel-shaped glass capsule that rises 300 feet above sea level and provides 360-degree views from high above the ship. Seaplex will become the largest sports and entertainment complex at sea, with attractions including bumper cars, roller skating and a circus school complete with a flying trapeze. The adults-only solarium and outdoor pool will return featuring a brand-new indoor pool with retractable roof. Several new cabin categories debut on the class: virtual balconies will dispel the traditional idea of an inside cabin, family-connected staterooms will prove more accommodating and studio staterooms with balconies will spoil the single traveller.

In March 2014, Royal Caribbean unveiled a new concept called Dynamic Dining, which eliminates set dining times and main dining rooms, replacing them with 18 restaurant options, flexible dining times and dining spaces that limit capacity to no more than 500 passengers. This will be rolled out on the Quantum Class.