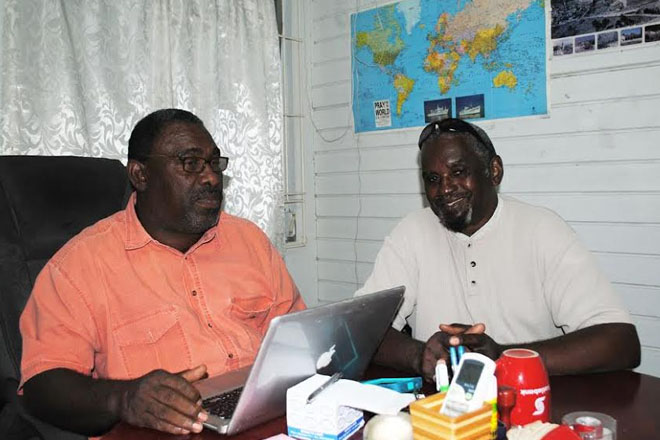 Basseterre, St. Kitts — Renowned man of the cloth, Pastor Lincoln Hazell of the Apostolic Faith Church, is a firm believer that church is not just about looking after the soul but it also looks after the whole body, stating that preaching alone is not enough.

“The community will be more understanding if you would meet the needs of the community,” said Pastor Hazell.

A man of his word, in September 2003 Pastor Hazell and his St. Johnson Avenue-based congregation held what they thought was a one-off service to honour sanitation workers, specifically those from the St. Kitts Solid Waste Management Corporation, which went off very well.

What Pastor Hazell and members of his congregation had not foreseen was the fact that on Sunday September 6 in 2015, their church at the Village would be hosting the 13th Annual Appreciation Service for all sanitation workers in St. Kitts and Nevis.

The service this year will be held under the theme ‘There is no Substitute for Good Sanitation’. Pastor Hazell observed that people take sanitation for granted until they start having problems when garbage is not picked up. He said: “Sanitation is not to clean up: Sanitation is a prevention thing.”

As it relates to issues to do with sanitation, Pastor Hazell speaks from a vantage point of having served the country as a Public Health Inspector for a period of eight years. He knows that cleanliness is godliness: “When Jesus fed the multitude, they went back and cleaned up. They did not leave the stuff around.”

Operations Supervisor at St. Kitts Solid Waste Management Corporation, Mr Wilmon McCall, recalls that in 2003 Pastor Hazell contacted them and indicated that he was trying to find a way of showing appreciation for Solid Waste workers for their hard work in a job that not many people hold in high esteem.

He said he was initially sceptical about the whole idea, but with the active encouragement of Mr Alphonso Bridgewater, General Manager, Solid Waste Management Corporation, they thought it was a good idea. The service was held, with Pastor Hazell preaching. “We were well in attendance and after which we had a nice luncheon which went on very well,” remarked Mr McCall.

According to Mr McCall the then Governor General, His Excellency Dr Sir Cuthbert Sebastian, was a feature at the services, and when not available he would send his second man in charge. Politicians also took part, including the then Minister of Health the Hon Rupert Herbert, and later the Hon Marcella Liburd. Then area parliamentary representative the Hon Sam Condor always attended the services.

He praised Pastor Hazell for the tremendous effort he puts in to ensure that people are fed after the services, adding that lately he has ensured that the sanitation workers are given not only awards, but also personal gifts. The pastor would visit business places to secure the gifts and he also started having annual luncheons at the Square in Basseterre to raise funds.

On being asked why the appreciation service became an annual event, Pastor Lincoln Hazell explained that when they were organising for the first service nobody knew what to expect but to their surprise it came out beyond their expectations.

“So we did that and the next year we did not bother to do it, but I couldn’t walk in the streets, as people would ask me, ‘when is this thing coming up again?’ The workers were looking forward for it, so the time came up to independence and we didn’t do it and they still were asking.”

They were forced to go back to the drawing boards, and the next one was held on the 4th of December in 2004. “We had to do it before the end of the year. After they wanted it so much we knew we had no choice, I mean you won’t have a chance to walk the street, so it became annual.”

Pastor Hazell is calling on Kittitians to keep St. Kitts clean rather than clean it up after the mess. He said he found it so sweet when one sees the people to the back of a band during celebrations and as soon as the band is finished it is cleaned immediately. “You do not even know if it was the place was dirty and that is the power of what it is all about.

“Biblically, as I said, as a church we believe that church is not about looking after just the soul, but we look after the whole body. So we think about social workers and we can help in the community, put a finger on something that we can do. So we actually identified the sanitation workers appreciation service that we are doing now.”