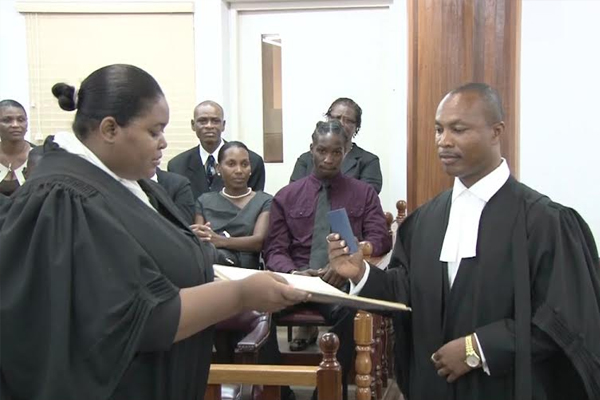 Basseterre, St. Kitts (SKNIS) — Acting Assistant Commissioner of Police (ACP) Vaughn Henderson has joined the legal fraternity in St. Kitts and Nevis after being called to the Bar on Friday (November 07).

Senior members of the Royal St. Christopher and Nevis Police Force joined Henderson’s family and friends for the ceremony held at the High Court in the Sir Lee Llewellyn Moore Judicial Complex.

Henderson said it was a proud moment in his life.

“My lady, many are the affliction of the righteous, but today with the help and grace of God, I rise above my adversities,” he stated. “My travail has been long and arduous but today we celebrate victory. A victory that says if you are fervent in prayer and steadfast in God nothing is too big for the God of ages.”

Henderson attributed his deep spiritual commitment to his mother Melvina Henderson and thanked her and other family members for their support and encouragement. When the father of three reflected on the sacrifices made by his children, Devanya, 18, Devashali, 16, and Vaughn Jr. 14, he became emotional.

“They more than anyone has felt the brunt of my sacrifice to pursue this lifelong dream,” he stressed, fighting back tears. “I owe them a debt of gratitude for being there with me every step of the way. My children, you kept me focused, knowing that the bigger picture was to make a better way for you.”

Henderson joined the police force in 1993 as a constable. He obtained a Bachelor’s of Law Degree at the University of the West Indies (UWI) in 2004. This was followed by a Legal Education Certificate (LEC) in 2014 from the Hugh Wooding Law School in Trinidad. The ACP’s application to the Bar was supported by Dennis Merchant Q.C. and seconded by Counsel Marsha Henderson of Henderson Legal Chamber.