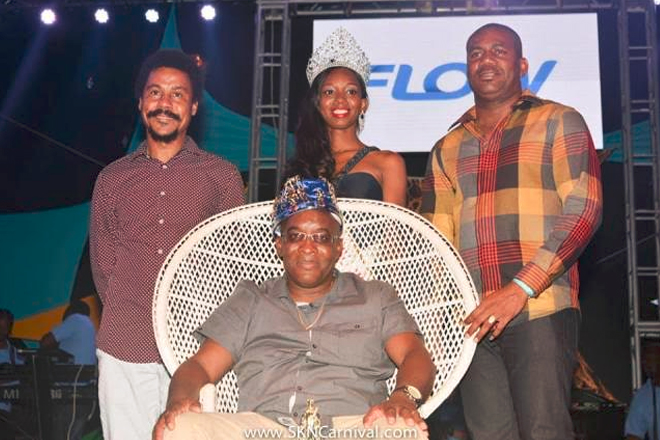 (ZIZ News) – Calypso lovers at the Sugar Mill were treated to a night of top class calypso music as seven artistes tried to take the crown from King Astro.

However, after more than four hours of performances, the Nevisian calypsonian, performing Reparations and Throne Speech, amassed a total of 759 points to retain his crown; becoming the first Nevisian to win back to back National Senior Monarch titles in the process.

ZIZ News spoke with the king afterwards, who said it was a culmination of a good year for him.

“I’m on a roll right now. Once Pencheon keeps producing the material that he’s producing, they’re in a lot of trouble. You know the feeling is a feeling that I can’t even describe. It was a plan, we set out to do this and it came to fruition and I’m very, very happy right now,” he stated.

Looking ahead, King Astro said his main focus in the new year will be to successfully defend his senior kaiso crown during the annual Culturama Festival.

“I have a booking for mid-month; maybe they knew something that I didn’t know; so I have a booking for New York in mid-month, then I have to redeem myself in Anguilla but before Anguilla I have some unfinished business to take care of in Nevis,” the two-time National Monarch said, adding “I have to repeat in Nevis, that is the plan. Nobody has ever done it in 42 years of Culturama and I plan to change that early next year.”

The next three finishers in Monday night’s competition were separated by just seven points, with Singing Jackie claiming the First Runner-up position with 736 points.

I-Sour Sop finished in the Second Runner-up spot with 733 points while the third Runner-up position went to Craig who had 729 points.

The other finalists were Queenie G, Ayatollah, Lady Diva and Lord Kut.