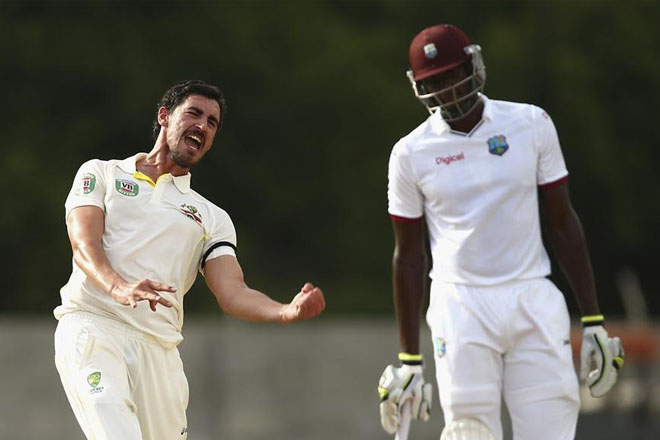 Sports Page — On Wednesday morning Australia began their defence of the Frank Worrell Trophy. By Friday evening they had retained it. Such is the nature of modern scheduling that a two-Test series was all Australia and West Indies could arrange. Such was the nature of the Roseau conditions that this abbreviated campaign began with an abridged match, won by Australia within three days.

The third and final day began with West Indies on 25 for 2 and in danger of capitulating. They needed 145 more to make Australia bat again. Australia’s morning began perfectly when Darren Bravo was taken at mid-off by a diving David Warner off Josh Hazlewood for 5. But then came the complication: Marlon Samuels and debutant Shane Dowrich ground out the highest partnership of the Test.

Their 144-run union threatened not only to take the match into a fourth day but to pull it out of Australia’s grasp and back into competitive territory. Only one wicket fell in each of the first two sessions. But then came the collapse. After tea West Indies lost their last six wickets for 27, set Australia a target of 47, and provided the rain and light held out, a three-day finish was on again.

David Warner had no intention of coming back on Saturday. He thumped a four and a six off Jerome Taylor’s first over, then another six off Shannon Gabriel in the second over. Warner edged Taylor to slip for 28 with five runs still needed, but Steven Smith joined Shaun Marsh and finished the job within the first five overs of the innings, a nine-wicket win satisfying the Australians ahead of the second Test in Jamaica.

In the end it looked clinical, but there were times throughout the match that West Indies were in the contest. When they reduced Australia to 126 for 6 on the second day, they sent some nervous moments through the Australian camp. But the unbeaten 130 from debutant Adam Voges was the big difference, his work with the tail giving Australia a comfortable first-innings buffer.