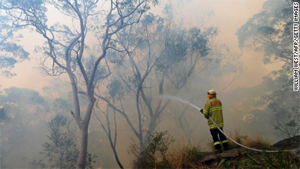 (CNN) Australia’s bushfires have such a long and destructive history there’s almost no day of the week that hasn’t been dubbed “black” or “ash” to mark a major conflagration.

There was Black Thursday in Victoria in 1851, which destroyed five million hectares and claimed 12 lives — the first large-scale bushfire in the history of white settlement in Australia.

Since then there’s been Red Tuesday in 1898 in Victoria, which consumed 2,000 buildings, Black Friday in Victoria in 1938 that killed 71 and destroyed 3,700 buildings, and Ash Wednesday in the early 1980s that left 71 dead in the state of South Australia.

Most recently in 2009, Black Saturday claimed 173 lives in the state of Victoria in southern Australia — many of the victims unable to even get the distance of their own driveways before they succumbed to the intense radiant heat generated by a bushfire.

Many argue that Australia’s catastrophic bushfires are simply a fact of life on a continent where its flora, heavy with combustible eucalyptus oil, constitute something of a seasonal time bomb.

Others say more sinister man-made factors are at work.