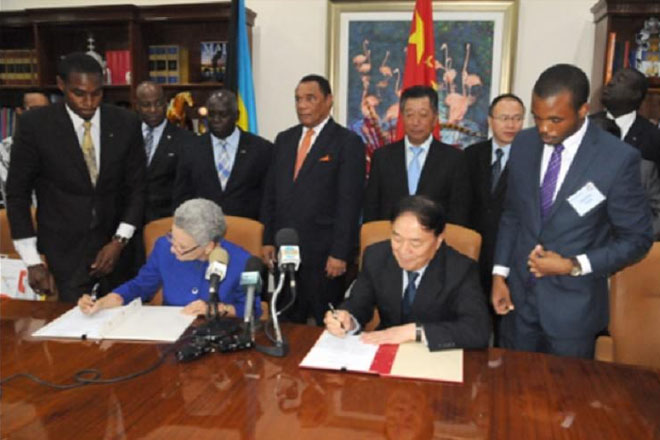 Nassau, The Bahamas — The Bahamas government has taken what it described as a “significant stride” in strengthening tourism, signing a memorandum of understanding (MOU) with China that establishes a framework for passenger air service between the two nations.

The Bahamas’ Prime Minister Perry Christie said the move came months after his government held discussions with China with a view to bring Chinese air service to the country.

The agreement was signed by Bahamas Minister of Transport and Aviation Glenys Hanna-Martin and Administrator of the Civil Aviation Department of the People’s Republic of China, Li Jiaxiang.

“The documents will lay a legal foundation for code-sharing of airlines and direct air route between China and Bahamas,” said Li after the signing, adding that a future flight will facilitate economic cooperation and people-to-people exchange.

The state-owned China Construction America, is building China’s largest overseas commercial real-estate project in the Bahamas – the $3.5 million Baha Mar resort – which has been affected by several delays.