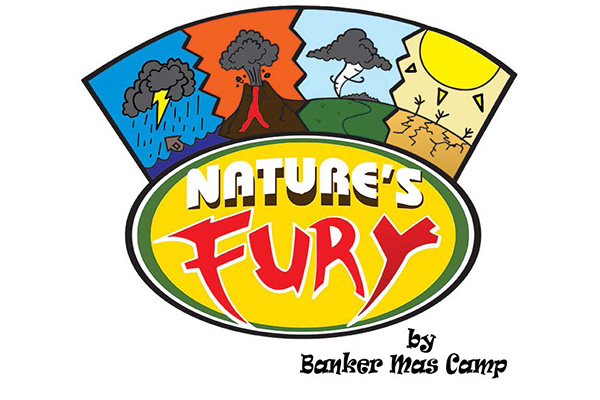 The young artist will present another colourful display dubbed, ‘Nature’s Fury’. The theme was conceptualized to bring about an increased awareness of the impact of climate change and will feature several natural disasters such as earthquake, tornado, volcanic eruption, hurricane and flood.

The costumes will be officially launched on Sunday 8th December 2013 at the Sugar Mas Breakfast Fete at the LIME Grounds.

The back to back Band of the Year Champion will be seeking a third (3rd) National title, following victories in 2011 with Somewhere in Taiwan and 2012’s Til de Soil.

The Nature’s Fury logo is the second logo that was designed for the Mas Camp’s costume presentation in its history of Mas building. The logo depicts the aforementioned natural disasters and was conceptualized under the influence of Edu-Culture. The Nature’s Fury logo represents the artistic designs and creations that will act as an educational tool to further inform revelers and the public about the natural phenomenon even after parade day.