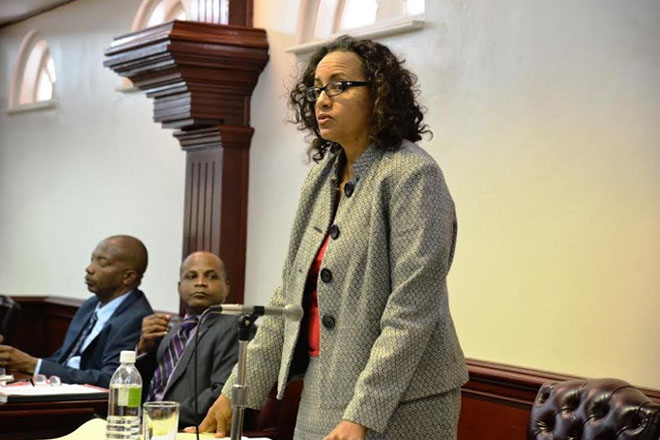 Basseterre, St. Kitts (SKNIS) — Government Senator Honourable Wendy Phipps, has described the Banking Bill 2015 as vital, as it seeks to update the provisions, safeguards operation policies and procedures governing the banking sector in the eight member states of the Organization of Eastern Caribbean States (OECS)

Speaking at Parliament on July 28¸ Senator Phipps, who has a background in Business and Management, explained the initial banking legislation.

According to Senator Phipps, the protection of the financial resources of depositors across the member states and the enactment of the safety and soundness of the OECS banking sector, are two most noticeable sections of the many provisions in the 14 different sections of the Act.

“This new Bill has far reach in consequences,” she said, while pointing out that it also gives considerable powers to the Eastern Caribbean Central Bank (ECCB), which is only natural, since they are the course of last resort to protect the hard earnings of the people of the region.

The 145 page Banking Bill, which was passed in the Federal Parliament today, July 29, 2015, replaces an 87 page document.