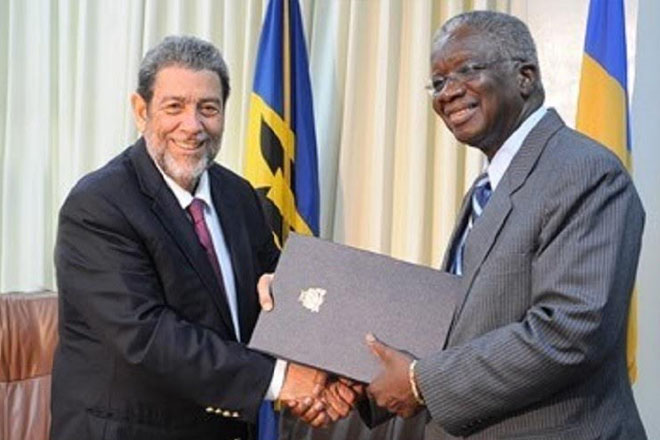 Bridgetown, Barbados — Barbados and St. Vincent and the Grenadines have signed a treaty establishing a maritime boundary between the two countries, the first ever of its kind.

Barbados’ Prime Minister Freundel Stuart, and Prime Minister of St. Vincent and the Grenadines Dr. Ralph Gonsalves signed the treaty which establishes a maritime boundary based on equidistance between the two countries.

It is the first such treaty between Barbados and a member country of the Organisation of the Eastern Caribbean States (OECS) and Stuart said it marked “a truly historic moment”.

“The definition of the extent of a state’s jurisdiction over its land and maritime space is not a small matter. In fact, the ability of a state to exercise this jurisdiction unimpeded is one of the very defining characteristics of sovereignty. To agree with one’s neighbours exactly where their jurisdiction begins and yours ends is thus a matter of the highest import to the proper conduct of the business of the state,” he said.

The Barbadian leader also pointed out that St. Vincent and the Grenadines was one of his country’s key strategic partners in the Caribbean region and both countries were committed to the pursuit of Caribbean integration.

“The treaty . . . is thus a palpable, tangible demonstration of that commitment to closer regional integration and closer cooperation between our two countries,” he added.

Stuart also lauded Barbados’ Ambassador to CARICOM, Robert ‘Bobby’ Morris who led the Barbados team in the negotiations, as well as the Commonwealth Secretariat, which provided technical advice.

“I know that boundary negotiations can be fraught with difficulty and can take years, sometimes decades. But our teams were able to move forward on the basis of mutual trust and good faith with exemplary alacrity. I am told there was but one negotiating meeting in May of this year, ” he noted.

The St. Vincent and the Grenadines Prime Minister agreed that the treaty was a testament to the excellent relationship between the two countries.

“We are the closest neighbour to Barbados and we have never had any fight over where the boundaries are. Barbadian fishermen would come into our exclusive economic zone, some would even come into the territorial sea and Vincentian fishermen would have done the same thing,” he said.

Gonsalves further explained that the agreement would have a number of practical consequences for his country, one of which was geothermal exploration. According to him, Reykjavik Geothermal Ltd and Emera Power, the owners of Barbados Light and Power, were involved in the development of geothermal energy in his country.

“We have more than one geothermal resource and we are currently engaged in the development of one geothermal area which has 60 megawatts of power . . . So just think of it, if at some point we can sell energy to Barbados, we would have to traverse not only our exclusive zone but that of Barbados,” he said.

Barbados will also have an opportunity to exploit the living and non-living resources in its national waters.