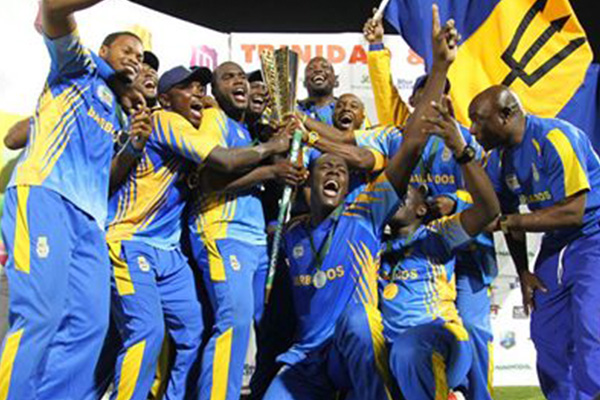 PORT OF SPAIN, Trinidad – Barbados defied the odds to defeat Trinidad & Tobago by 17 runs and win the NAGICO Super50 Regional cricket tournament, their first since 2010.

The Barbadians lost one of their key batsmen, Kirk Brathwaite, who was sent home under controversial circumstances before the start of the tournament and then had a rained out match in Tobago.

Barbados made 252 off 48.4 overs and then restricted Trinidad & Tobago to 235 off 45.5 overs and claimed their sixth regional 50-over championship.

Barbados won the toss and chose to bat against the home team with openers Dwayne Smith and Kraigg Brathwaite setting the stage with a 127-run first-wicket partnership.

Smith, who was named in the West Indies’ One Day International squad for the upcoming series against Ireland, justified his selection with a swashbuckling 83 off 77 balls which included 10 fours and two sixes.

He was well supported by Brathwaite (36) and Jonathan Carter, who missed the 50 after being beaten by the pace of a Sunil Narine’s delivery. His 49 was the second best effort of the Barbados team which lost wickets quickly and except for a tail-end unbeaten 22 from Sulieman Benn.

Kevon Cooper picked up 4-62 and two wickets each for Narine and Lendl Simmons gave Trinidad & Tobago a glimmer of hope.

But it wasn’t the best of start in their run chase of 253 with five batsmen back in the dressing room for 94 runs.

Wicketkeeper-batsman Denesh Ramdin provided Trinidad & Tobago a lifeline with 68 from 76 balls. He punished Smith in the 43rd over with two boundaries but then he was tricked with a full-length delivery which kept low and struck him infront of the wicket and Trinidad struggling on 208-9.

The last standing pair of Rayad Emrit and Ravi Rampaul brought the home team back into the game while entertaining the crowd with some power hits.

But Emrit fell short of an attempted third run after Fidel Edwards prevented a boundary from Rampaul. Emrit was run out on 27 and Rampaul remained unbeaten on nine as Barbados claimed their first victory against Trinidad & Tobago in 50-overs cricket since 1977 and their sixth regional limited overs title.

Players from both teams picked up most of the outstanding performances awards of the tournament. Smith was the leading batsman; Emrit was the top bowler; Tamar Lambert of Jamaica, the best allrounder; Trinidad & Tobago’s Evin Lewis, the best fielder and Ramdin took the award for the best wicketkeeper.