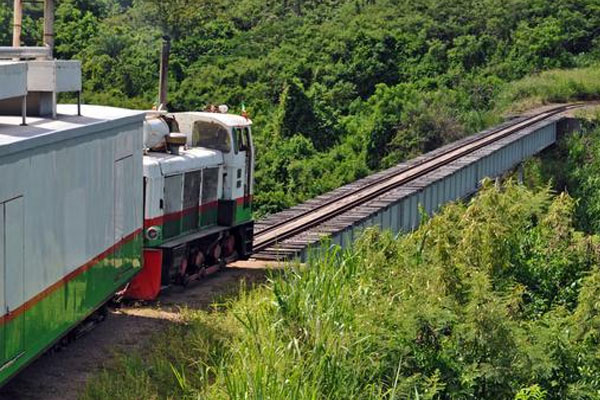 Basseterre, St. Kitts (CUOPM) — It is said to be the last railway in the West Indies.

“On an island some 29km long and 8km wide, with its west side bordering the Caribbean Sea and its eastern side facing the Atlantic Ocean, history moves forward – albeit slowly and shakily – in the form of the Saint Kitts Scenic Railway. Dubbed the “last railway in the West Indies” and one of the few of its kind, the narrow gauge railway loops travellers 29km through verdant jungles, over canyon-spanning steel bridges and along the island’s rocky coast. But travellers were not always the train’s primary cargo,” according to BBC Travel in the article published on January 8th 2015.

Giving a back ground to the railway in St. Kitts, the writer, Katherine LaGrave, noted that in the early 2000s, rising production costs and low market prices led to the decline of the island’s sugar industry. But unlike other islands, which ripped up their train tracks in correlation with the industry’s demise, St. Kitts turned its narrow-gauge railway into an attraction that could transport a new kind of cargo – travellers.

“The island kept the original rails and replaced the cargo train of yore with a Romanian-built locomotive and Seattle -built double-decker cars, resulting in a journey that is slow, swaying and satisfying,” said LaGrave.

“These trains were specifically designed with the observation deck on the upper level to be about 4m above ground, which is what we measured as the height of the tallest cane,” said Thomas A Williams, the St. Kitts Scenic Railway, Executive Vice President and General Manager.

“This means that you are virtually standing on top of the cane. You’re going through rainforests, you’re looking at the ocean, and you’re seeing the flora and the fauna. If you’re up at the level of the train, you see what you would have never seen otherwise.”

“Williams is right: Saint Kitts’ dense jungle and mountainous terrain mean few travellers reach the island’s interior, let alone see it from 4m above ground. Dominating the northern upland and the western part of the island, 1,156m-tall Mt Liamuiga is only accessible only foot. Houses and settlements are primarily built along the coast, partly because of the rugged terrain, but also because the fertile core was deemed prime for sugarcane. The only development in the island’s interior, then, is several plantation homes and a few scattered communities,” said the BBC Travel article.

She shared that the journey aboard the Saint Kitts Scenic Railway began just northeast of Basseterre, at Needsmust Station, where the train lurched to an 8mph chug – its maximum speed.

“From my right side seat, I could just make out the shape of Nevis, Saint Kitts’ sister island, in the distance. Moving through dense jungle, I watched for green vervet monkeys, brought to Saint Kitts as pets, and then left behind when the French departed in 1783. There’s said to be at least one monkey for every two humans on Saint Kitts, so I wasn’t surprised to see several gazing calmly back at me, mid-chew,” said LaGrave.

“We passed former plantations established in the early 1700s, and I noticed the cylindrical brick chimneys and wider, cone-shaped bases of former windmills – remnants of the sugarcane industry. I waved back at schoolchildren who leaned out of their classroom windows and to families who appeared on their front steps to watch the train pass by,” she said, adding:

“I clutched my seat as we teetered over each of the four steel trestles in the last hour of the train journey. At approximately 100m long, Christ Church is the longest, crossing over the island’s main road some 15m below. I was thankful to be at the front of the railroad’s five cars – not watching others wobble and creak from behind.”

“After crossing Christ Church, the train headed northeast for the coastal village of Belle Vue. From here, I could see waves crashing onto Black Rocks, a jagged rock formation comprising lava flow from Mt Liamuiga’s last eruption more than 1,800 years ago. Just north, I saw the island of Saint Barthelemy – first settled in 1648 by settlers from Saint Kitts – as well as the nearby islands of Sint Eustatius and Saint Martin. Stepping off the train at La Vallee Station, two hours after my departure from Needsmust, I stretched my legs and took in the view of the water,” she wrote.

“There’s no other island that has the historical hook that we have, in that it’s the mother colony of the Caribbean – the first settled colony for the British as well as for the French,” Williams said. “Very little remains in terms of the actual sugarcane that we have. But you can tell the story of our history and culture via sugar. And that’s the real importance.”

Christopher Columbus discovered the islands of Saint Kitts and Nevis in 1493, during an exploration to the New World. Some say he chose to simply name it after his likeness (the isle is more formally known as Saint Christopher Island). Others maintain that he thought it resembled the shape of St Christopher, the patron saint of travellers, carrying the Christ child on his shoulder. Whatever the case, the discovery spawned battle upon battle between the British and French over the colonization of the islands, which were home to fresh water, large salt deposits and – above all – fertile soil.

In 1713, the British won sole control of Saint Kitts, and its fertile soil quickly made the island the Caribbean’s leader in sugar production. By 1776, Saint Kitts had become the Caribbean’s richest British colony per capita, with 68 sugar plantations across the island. Eventually, a railroad was deemed the most efficient way to transport the sugar from the island’s dramatic interior to its capital, Basseterre, and between 1912 and 1926, narrow-gauge railroad tracks were built to meet the demand.