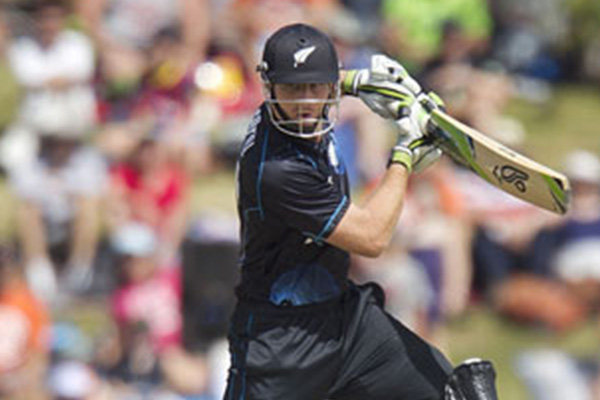 Worries over the weather spoiling the first ever ODI in Nelson were eased when the sell-out crowd was greeted by blue skies and bright sunshine on Saturday morning. The rain did arrive, but only after the match was well out of West Indies’ reach and ended up curtailing a massive mismatch, the sort of ODI which cries out for shortening.

New Zealand finished on 285, two more than what they plundered in Queenstown, though this time they had the full 50 overs and produced a more conventionally paced innings. It was a combined effort from New Zealand’s batsmen, with each of the top four making 47 or more, though only Martin Guptill went on to a half-century, top scoring with 81.

It’s hard to see how an injury-hit West Indies squad could compete in this series. They already have a lengthy list of sidelined players, and there was an addition today when Ravi Rampaul was ruled out with a finger injury. That meant the visitors are without at least six first-choice players and were down to 12 available players.

While the bowling, at least, is of international standard, the current batting does not measure up. Chadwick Walton, a man with a List A batting average of 16, opened the innings today and was promptly run-out for a duck in the first over. Even with Walton absurdly high in the order, Dwayne Bravo came out at No. 5 – at least one, and possibly two, spots higher than he would in a strong line-up. Lendl Simmons is the only player with an average above 30, and the rest of the specialist batsmen have little international experience.

West Indies’ chase began with Walton’s run-out in the first over, and took another hit when the other opener, Johnson Charles, also fell for a duck, flicking to fine leg. Simmons and Kirk Edwards briefly kept West Indies in it, but Edwards’ run-out sucked the momentum out of the chase.

With a drizzle arriving around the 15th over, New Zealand turned to their spinners to quickly get through to the 20-over point. They hastened the speed of the game, but lowered the pace of scoring and when Simmons holed out to midwicket for 43 in the 22nd over, the chase was essentially lost. West Indies pottered around for 12 more overs, before the rain became heavy enough to quicken what would have been a drawn-out defeat.