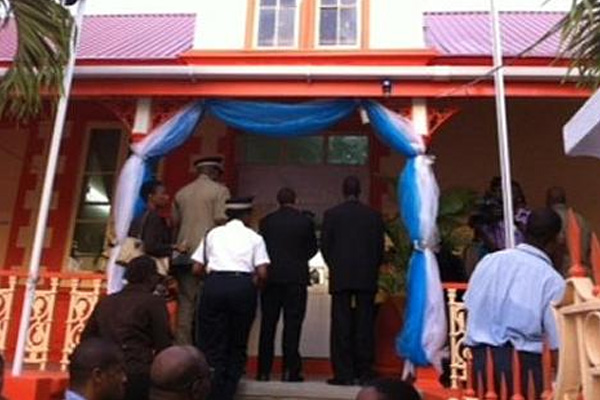 Castries, St Lucia — No matter how bad things are, with the threat of a five percent wage cut, on top of reduced budget allocation and reduced human resources, the Royal Saint Lucia Police Force (RSLPF) somehow found confidence in themselves, ignoring the political and economic forecasts.

As a result, the Central Police Station in Castries now has a new feel, a new look and a burst of energy, made possible through the commitment demonstrated by the Deputy Commissioner of Police Corporate Affairs/Administration Errol Alexander and the management and staff of the station.

“Recognizing our understanding of its historical significance both to law enforcement and to the general public, and the heavy demand for working space, and comfort to dispense quality policing, officers formed a committee called the Central Development Committee to oversee the refurbishment of the abandoned building,” Acting Superintendent Emmanuel Joseph said.

The resolute actions of the men and women of the RSLPF resulted in the recommissioning of the Central Police Station on Bridge Street, Castries, on September 4, and their resourcefulness is nothing less than remarkable in the restoration of the building that represents a major step towards fulfilling the policing needs in Castries and once again to afford the historic facility a new lease on life, intended to reflect national pride.

“This marks the RSLPF’s commitment towards providing a professional policing service and also marks a chapter in the Force’s history, which will serve as a model as to what can be achieved when goals and objectives are persistently pursued in spite of criticism, opinions and discouragement.” Alexander said.

The facility was abandoned about three years ago due to mould infestation, mechanical, electrical and facilities management issues. And that’s where the leadership of Alexander and Joseph filled the void that government, their employer, was unable to perform.

Utilizing the secondary skill-sets of the men and women of the RSLPF over several months, to work in the evenings, weekdays and weekends, with the special assistance of Rayneau Gajadhar, Construction and Industrial Equipment (CIE) Ltd, and other corporate partners, such as RG Group of Companies, M&C Home Depot, Precision Surveillance, among others, the lawmen refurbished an abandoned, mould infested building that the ministry of infrastructure, port services and transportation with all its resources would apparently not touch with a ten-foot pole.

Now the City of Castries has a legitimate and functional Central Police Station, one that is clearly identified by its distinctive look and architecture.

Police Commissioner Vernon Francois, in his remarks, put it this way: “We are celebrating the determination of officers and the tremendous support of corporate Saint Lucia, I am extremely proud of the officers’ move on this project. They could have simply said it is the responsibility of the government, but with considerable corporate support they decided that we are the government and we should make our contribution.”

By this effort, the citizens and the business community of Castries Central can now look forward to the resumption of full law enforcement services, strong community policing, and a Central Police Station that the capital city could ill afford to do without.

The restoration of Castries Central Police Station by the RFLPF and corporate Saint Lucia is a solid demonstration of financial bipartisanship at a cost in the vicinity of EC$500,000.

Undeniably and without much fuss, the RSLPF have led the way once again to cement its contribution to nation building, particularly in the case of Joseph, who began his retirement on September 5.

Both Alexander and Joseph have left a legacy in the history of Saint Lucia that most politicians only dream of.