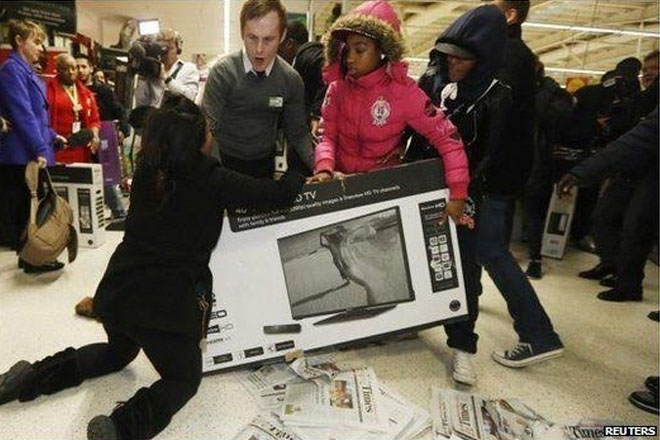 Consultants Experian and online retail group IMRG are predicting online purchases will hit £1.07bn, the first time they have passed £1bn in one day.

Visa Europe says £1.9bn could be spent online and in-store on its cards alone.

The discount day originated in the US, where it takes place the day after Thanksgiving and kick-starts the Christmas shopping period.

Many UK retailers have said online deals will go live from midnight onwards.

Last year, Amazon sold more than 5.5 million items on Black Friday at a rate of 64 items per second.

Ebay is expecting nine million British consumers to log on during the 24-hour period and for 25 items to be sold every second.

Some stores will be opening their doors from early in the morning. These include Argos shops and a selection of Tesco, Sainsbury’s and Currys PC World stores.

Earlier this year, retailer John Lewis warned that UK firms would have to rethink the heavy discounting of Black Friday, but it has decided that it has little option but to compete with other retailers and will be offering in-store and online promotions.

However, supermarket chain Asda, which started Black Friday promotions in the UK in 2013, has decided not to take part this year.

It said there was “customer fatigue” around such events and it was providing savings across the Christmas shopping season.

Last year, police were called to a number of stores to break up scuffles among shoppers vying for the best deals.

The police have warned shops to ensure they have carefully thought out security plans so they can avoid any trouble.