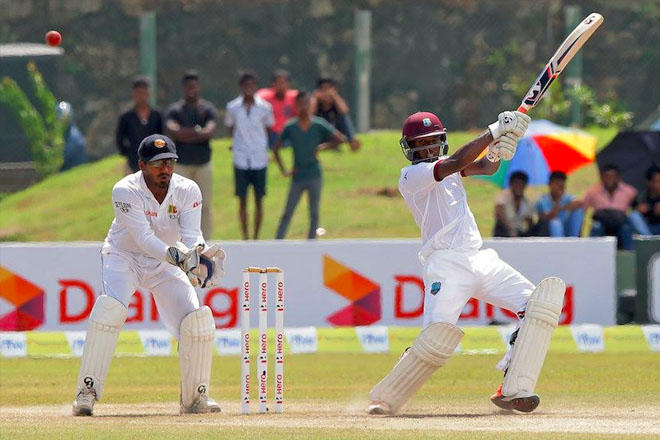 Blackwood Looks to Build on Patience and Restraint

The strikes down the ground are high and sweet. His pull is whiplash-quick and the cut severe. So it’s not his strokeplay Jermaine Blackwood seeks to sharpen in Sri Lanka. It is his instinct to survive. “If I’m at the crease for a long period of time, I’ll be making runs,” is his belief.

Blackwood has been among West Indies’ brightest emerging talents over the past 18 months, in which he has put together an encouraging record spanning 11 Tests. He averages 42.47 from 20 innings so far, and has runs against quality Test attacks.

His maiden innings of 63 against the likes of Tim Southee and Trent Boult suggested West Indies had unearthed a good batsman. His excellent turn against James Anderson, Stuart Broad and England in the middle of the year, confirmed it. He hit 311 runs at an average of 77.75 in that series, having struck a first Test ton, then hit the winning runs in a chase that leveled the series.

A relatively lean series against Australia followed, but Blackwood has rebounded in Sri Lanka, hitting 92 from 135 balls in the second dig in Galle, while his team-mates floundered around him. Blackwood says it was restraint that allowed him to unlock his attacking game, after having fallen for 11 in the first innings.

“I made a mistake in the first innings playing to a ball outside the off stump that I shouldn’t be playing to,” he said. “After I get out I go back and rethink my innings. I got out there in the second innings and told myself I’m not going to play any balls outside the off stump early up. I did that and in the end I got a good result. I was trying to push into a century but in the end I get out in the last. I thought it was a good innings.”

It is the kind of restraint he seeks to refine and reproduce. Sometimes hailed as a disciple of the destructive school of Caribbean batting, Blackwood said he is learning to incorporate prudence into his attack.

“There’s one major issue that I’m still working on – shot selection early up in my innings. Once I’m past that early phase it’s quite easy for me. I used to play a lot of shots and loved to feel the ball on my bat. When I reached Test level I realised it’s much different because you get less bad balls in Test cricket than you do in first-class. So I need to learn to be much much patient. Once I’m patient I’m adapting to that very quickly.”

Blackwood was among the few West Indies batsmen to survive long spells from Rangana Herath, and even ventured two straight sixes and a four in one Herath over, near the end of the Galle Test. His team has come to Sri Lanka with a poor reputation for playing slow bowling, but Blackwood is undaunted by Sri Lanka’s top spinner.

“Herath is a wonderful bowler, but a bowler is a bowler,” he said. “Once he bowls a bad ball, I’m going to hit any bowler. If we can bat him out, it’s going to be much easier for us.

“Right now my defence is pretty good, as you can see. Last game Herath was bowling brilliantly and I was batting easy. For me it’s about staying patient and batting more sessions. If I do that I’m going to score more runs. I just need to control my tempo while I’m batting and trust my defence.”

Blackwood has not made a limited-overs debut yet, but said Tests had always been his dream format and remains his “pride and joy”. He wants a hundred in his next match, as every batsman does, but he has high hopes for his batting statistics as well. He averages 45.66 so far in 2015, with one hundred and four fifties from 14 innings.

“I do want to get my Test average for this year up to 50,” he said. “For that I’m on the right track right now. My gameplan is very simple. If I see a ball to hit, I’ll hit it. Choosing the right ball to hit – that’s what I’m working towards.”