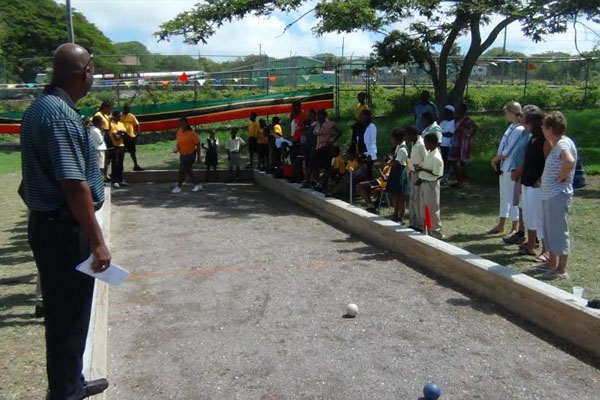 Sports Page — A brief but meaningful ceremony was held at the grounds of the Cecely Browne Integrated School or the former Special Education Unit, on Friday 24th October.

It was the day when a brand new Bocce court was officially handed over for the use of the school and by extension, community members.

Supervisor of the institution, Mrs. Violet Clarke in chairing the proceedings welcomed all present and noted the value of CONNECTIONS in demonstrating how several individuals and entities can work together for a common good.

Three students from the institution, spoke of their achievements at previous Special Olympics games

This was an interactive session which involved the children.

Representative of the Four Seasons home owners Association, Teri Andrews, noted that she came to Nevis with her husband and eventually as they settled down, they built a Bocce court at their home.

However, three years ago, she met Mrs. Violet Clarke and through the CONNECTIONS, she spoke to one of the top personnel at the Four Seasons Resort Estate about the importance of helping the institution

He in turn was able to witness first hand, the return of a successful Nevis Special Olympics team and was very impressed with the support of the parents etc.

They then coordinated in building a Bocce court for the School.

Craig who is another home owner, explained that he thought that the project was a good idea and that is why he threw his full weight into making it a reality. He thanked all of the CONNECTIONS who had made the building of the court possible.

Long serving member of the Special Olympics team, Randolph Boddie elaborated on the game of BOCCE which he says originated with the Greeks and later took root in Italy.

The ancient sport is coded as an inexpensive game of thought and strategy.

Another long serving member of the Special Olympics committee, Mrs. Debra La Louche, delivered the vote of thanks.

Mr. Boddie then picked two teams and explained the game to the curious onlookers, while the players were competing against each other.

According to Mrs. Clarke, even though the court will mainly serve the school, other schools and members of the general public are invited to play the game.