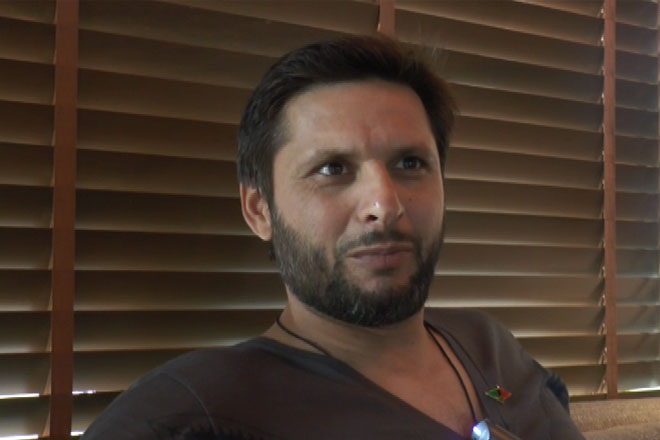 Speaking to the media shortly after his arrival to St. Kitts, Afridi said he has high expectations for this year’s tournament.

He said, “It will be great fun and I think 20/20 is all about great entertainment and I think I still remember in 1996 when I was under 19 and I came here with the Pakistan A team so I think it’s some great memories here in the past and I think I’m gonna enjoy this cricket. After World T20 I’m gonna retire from all formats but I will focus on league cricket, county cricket.”

Afridi, who will be making his CPL debut this year, said he hopes the fans enjoy the matches. He also outlined what it will take for the St. Kitts and Nevis team to be successful throughout the tournament.

“I think in 20/20 it’s not about the big names. It’s about the day, it’s about how lucky you are, it’s about the less mistakes you do on the day and I think I can say we have some big names…Samuels no doubt really perform well for West Indies, I’ve played with him lots of time, and (Martin) Guptill. So it’s a good side, it’s a very balanced side and I hope the local people they enjoy this event.”

He said he’s also open to sharing his experience and knowledge with the younger players on the squad.

“I think it’s a good thing for youngsters to learn something for the professional cricketers, from the outsiders and I think if somebody wants my help I would definitely work with these guys; the youngsters,” the former Pakistani cricketer stated. “It will be an honour for me to work with the youngsters. It will be good for West Indies cricket and I think as a professional cricketer I have to do besides the cricket, besides the matches, I’d love to join these guys and give some of my experience to them.”

The St. Kitts and Nevis Patriots will open its 2015 CPL campaign against the St. Lucia Zouks on June 24th.