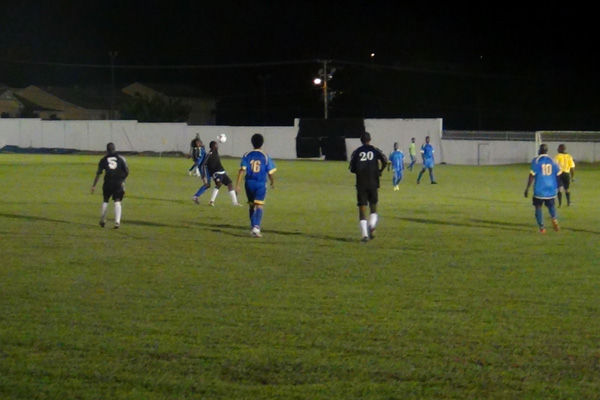 (Sports Page) It would appear as if the statements made by Errol JABAL Tyson, one of the Coaches for the Brantley Bronx Crisis team, are holding their weight in gold. After an initial lack luster performance in their earlier games, the Bronx team won a game by scoring all of 10 goals and Coach JABAL declared then that the Bronx team will not lose any more games for the season.

Interestingly, coming up against the high riding Brand Slybo Stoney Grove Strikers team in match two on Saturday 2nd November, some of the pundits felt that he may well have to swallow all of that ‘chat,’ However, it was the Stoney Grove team that would be in for a huge surprise at the final whistle.

The ultimate star was Shaheed Tyson who slammed home a hat trick of goals for the Bronx team. He showed that there was a reason why they call him SIZZLER. He was sizzling on the night.

Javid Sabatree scored the other goal for the Bronx team and the two scorers for the Stoney Grove team were Errol MARLEY Newton and Delroy Arthurton.

In the first game played that same night, the All Stars team showed why they are a team not to be underrated. As a matter of fact, they seem to be making it a habit of drawing games, when the general feeling is that they are down and out.

Hot on the heels of their come from behind drawn match versus CCC Bath United last week, the All Stars entertained the fair sized crowd with a repeat performance.

They engaged the Villa United team and the game seemed all wrapped up with Villa leading with a scoreline of 2 goals to nil. However, just as they did versus the CCC Bath team, the Allstars men demonstrated a resolve and energy beyond their general years and came back to draw the game, 2 goals –all.

Scoring for the Villa team were Azeek James and Gregory Forde, while the fleet footed Vaughn Sargeant knocked home the two goals for the All stars team.

There was one match played on Sunday 3rd November when SL Horsfords Highlights took care of Hardtimes with a scoreline of 2 goals to nil.

The speedy Adrian Williams continued his habit of scoring goals with one, while the other was scored by the team’s goal keeper, Jurnel Turner, from the penalty spot.

The next game in the exciting league is set for Tuesday 5th November when CCC Bath United takes on A & M Stones United at 7 pm at the ET Willet Park.