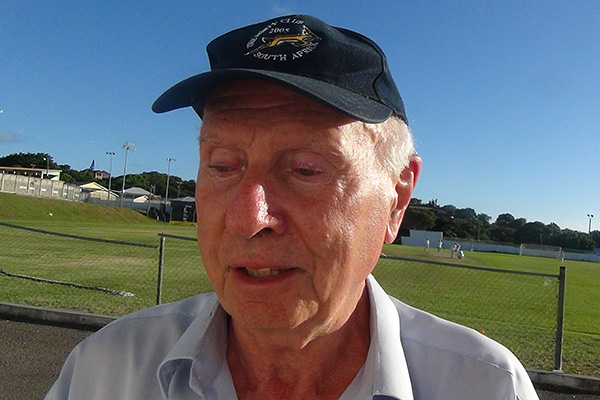 He is a quietly spoken man and his humble nature belies his greatness.

As Brian Scovell watched his team referred to as the England forties club from the pavilion at the ET Willet par, you would not have guessed that he is a famous sports writer.

In an interview with the much less reputed local sports writer, Curtis Morton, Scovell spoke with pride about his forty years as a cricket writer for the Daily Mail newspaper.

He noted that currently there is too much competition in sports writing for established newspapers and advised budding sports writers to utilize the social media via the internet services available to develop their skills.

He noted that sports journalism certainly will not make anyone a millionaire but indicated that his years in the field he loves, have been joyous ones.
‘I have travelled to 19 countries and i have interviewed all of the major captains and players in the world for over 45 years,’ he said..

In citing one unsavoury incident during his career, he stated that there were many but referred to his coverage of a Football game when a certain Veli Jones unleashed a brutal deliberate tackle on another player which cut short the career of Gary Stevens.

His top moment out of the many which he has experienced , was an innings by Ted Dexter facing up to the wrath of the speedy Wes Hall and Charlie Griffith.

One of his biggest moments however, was the opportunity to write the biography of the great Brain Lara.

He noted that when he was recommended to Lara, the great West Indian batsman told him that he was too old but after he leant of his vast experience which included the biographies of Sir Garfield Sobers, Sir Bobby Robson and Jim Laker, Lara finally agreed.

Scovell noted that his greatest task was to get interview times with the great batsman.
‘He was very disorganized and I had to be chasing him around and there were many times I called one of the many phones belonging to the world record holder, only to receive no response,’ he noted..

He referred to an incident with Brian Lara one day when he thought that he had finally tracked him down, only to find that Lara had shown up in dress clothes for a photo shoot.
As they discussed the issue of him getting into his cricket attire, Scovell left briefly and when he returned Lara had zoomed away in his vehicle and later provided a medical certificate indicating that he was ill from of all persons,, a Gynecologist!

Scovell was so desperate for the story that soon after that when he saw Keith Pyper, a young black wicket keeper, who was about the same height as Lara and he asked him to pose in a helmet playing a Lara like shot. Initially Pyper refused but when he was offered 20 pounds, he agreed.

Scovell sent through his story on Lara using the picture of Pyper, but he was later chastised by the Editor who picked up the error he has since written another book on Brian Lara which has attracted more attention than the first. It is entitled; ‘Cricket’s troubled genius’