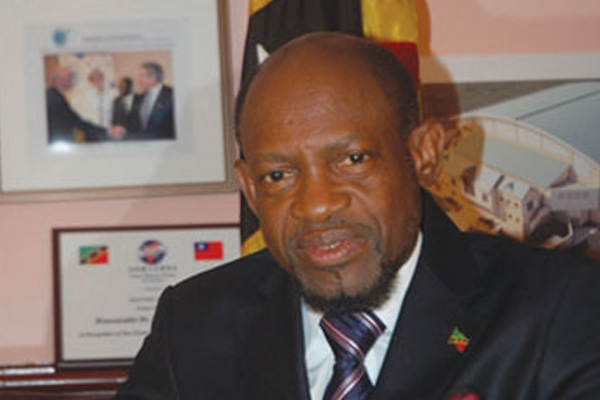 Bright future ahead under Labour despite deception and distortion, says PM Douglas

Basseterre, St. Kitts (CUOPM) – Despite deceptions and distortions thrown in the paths of past and present Labour Administrations, St. Kitts and Nevis continues to move forward.

“Motivated by one thing – the knowledge that the people of St. Kitts and Nevis, and indeed the world, are aware that the St. Kitts-Nevis Labour Government has made, and continues to make, in dramatic and indisputable ways, the poor, working class; the working class, middle class; the middle class, wealthy; and we work with the wealthy to enable them to use their wealth for the further advancement of both themselves and our Nation,” said Prime Minister of St. Kitts and Nevis, the Rt. Hon. Dr. Denzil L. Douglas, on “Ask the Prime Minister” his weekly conversation with the people of the twin-island Federation.

Referring to February 27th 2014, the 47th anniversary when on that date in 1967, the Labour Government, led by the Right Excellent Sir Robert Llewellyn Bradshaw, decided that the people of the then-British colony of St. Kitts, Nevis, Anguilla should ready themselves for the challenges, the demands, and the very hard work involved in running their affairs of being an independent nation.

“His (Bradshaw’s) publicly proclaimed objective, of course, had always been full and complete independence – the status we enjoy today.  And so he took the bold step of entering into what-was-known-as “Associated Statehood” – as opposed to colonial status – with Britain.  Each time our enslaved ancestors broke free of the estates’ grip……or staged work stoppages, as during the 13-week strike, we were placing ourselves on the path to eventual independence, but our Associated Statehood status in 1967 was, as I’ve said, our first official and internationally recognized step on our irreversible path to independence,” said Prime Minister Douglas, who compared that period to the present when Kittitians and Nevisians, under Labour administrations own their own land, their own home, attend secondary and tertiary education and owners of small and medium-sized businesses.

Dr. Douglas noted with the ushering of semi-independence, there were those (PAM opposition) who viciously attacked and condemned Mr. Bradshaw as he strove to place St. Kitts and Nevis on the path to Independence.

“Indeed, we were all told (by the then PAM opposition), over and over back then, that with Independence, if we had two goats, Bradshaw would take one.  And that whenever we had two of anything, with the coming of Independence, one would be taken away.  And this happened because the opposition at that time saw public manipulations and public distortions as their only path to power,” said Prime Minister Douglas, who likened what is now happening in 2014.

“And that brings us to today, because one day, 2014 will be history as well.  And when the historians write about this period, they will note that there were six Nationals who brought a Motion of No Confidence against their Government, as it is their right to do,” said Dr. Douglas.

“The six wish to see their Government fall because, according to their motion, St. Kitts-Nevis as “at its lowest ebb since Independence”.  Let me repeat – their Motion asserts that St. Kitts-Nevis “is at its lowest ebb since Independence”.  Historians will note that while ordinary people owned no land at Independence, and while they never dreamed of owning their homes; while the PAM Government had at the time of Independence not provided $100 million in student loans so the children of ordinary families could attend university as my Government has, today thousands of new landowners and new homeowners can be seen all throughout our country.  But it is not only the ordinary people of this country that this Labour Government assists.  Wealthy, prominent individuals, who shall remain nameless, and who stridently – stridently – oppose my Government have come to me – in private – seeking the Government’s financial and other assistance for their children as well.  This, I have willingly done. And this I shall do again.  Because the St. Kitts-Nevis Labour Party exists for the strong and the weak alike.  That is why we not only welcome and aid wealthy families, but formulate pro-business policies that have caused this country’s big business to expand and grow.  The evidence is all around us – proving that our country is NOT at the lowest ebb of anything.

They will note that, under my Government’s leadership, St. Kitts and Nevis has, for several years, been the number one exporter of manufactured products to the United States in the Eastern Caribbean. They will show that not only have our civil servants  never missed a payroll, but they have received their increment, been given double pay, a raise this year, will receive another next year, and another the year after that.  History will show that our country, under this Government, has attracted more direct foreign investment than any other nation in the Eastern Caribbean; our life expectancy is roughly that of the world’s wealthiest nations;  and our hard work has caused our country to be internationally classified as a high income nation.

The Commonwealth, comprised of some 55 nations, officially requested that St. Kitts and Nevis lead the Commonwealth’s international negotiations regarding the financial interests of small states.  The Clinton Global Initiative singled out our leadership for the highest public praise.  We have been honored by the South-South Initiative, and here at home massive crowds flock to our marches and rallies.  Yet the six claim that my Government does not enjoy public confidence.

The Honorable (Vance) Amory, Hon (Mark) Brantley, and others charge, in their Motion, that my Government failed to consult the country prior to our land-for-debt arrangement.  However, my Government held an open parliamentary debate on the issue. Premier Amory and Deputy- Premier Brantley, in contrast, held no such debate where Nevis’ own land-for-debt arrangement was concerned.  Instead, they arranged for Nevis’ land-for-debt resolution to be signed in secret.  It was only as a result of a leak that the public ever learned of this – proving that it was not because of land-for-debt that the six wish to see this Government fall, after all.

In their Motion, the six who wish to be in Government condemn electricity rates, ignoring the savings my Government provides through our conservation-incentive policies.  They claim that we have not disclosed our arrangements with the IMF when all such details are public knowledge.  They condemns the SIDF although, under the SIDF, this country’s citizenship investment program was changed to ensure that for the for the first time in our nation’s history, farmers, students, small businesses, government, and even big businesses would benefit from our Citizenship by Investment Programme, whereas under the PAM government, the Citizenship By Investment Programme was designed to benefit only – and I stress only – private individuals with real estate to sell.  This, too, we must remember.

As we reflect on our history as a people during this Black History Month, Listeners, let us give rejoice for those who worked so hard – and in the face of such bitter opposition – to move us forward over these past four centuries.