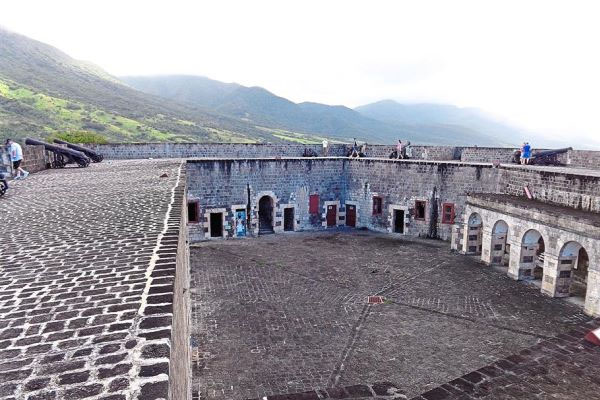 Basseterre, St. Kitts (CUOPM) — St. Kitts’ multi-level Brimstone Hill Fortress said to be the second-biggest fortification in the Caribbean, is also one of the biggest attractions in the Federation of St. Kitts and Nevis.

Bob Browning in a feature story headed: “Caribbean’s fortress of attraction in St. Kitts” wrote Brimstone Hill is topped by a big fort on a small island discovered in 1493 by Christopher Columbus.

He continued: “The multi-level fort, sitting 244m above the Caribbean, is one of the best-preserved historical fortifications in the Americas with walls 2.13m to 3.66m thick. It was built largely from quarried blackened basalt rock from 1690 to 1790.

The 15ha fort is a tribute to British military engineers who designed it and African slaves who built the fortification over a century.

It was once hailed as the Gibraltar of the West Indies, due to its imposing height and supposed invulnerability. It was captured by the French in 1782.

The prominent Citadel is one of the earliest and finest remaining examples of what was then a new style of fortification known as the polygonal system. The multi-sided fort made it easier for defenders to avoid being flanked by attackers.

It was designed in response to the growing use of explosive artillery shells. Each face of the fortification had a protected structure that protruded from the walls and could provide fire to keep attackers at bay.

Brimstone Hill Fortress features the remains of a large, complete military community of the 18th century, a time capsule for history lovers. It’s the second largest fortification in the Caribbean. It is a United Nations World Heritage Site where restoration is slowly continuing.

Visitors can explore the Citadel, the Western Place of Arms, the Eastern Place of Arms and the Fort George Museum filled with exhibits and displays. All are at the highest level of the fortress, accessible via a steep and imposing ramp and steps paved with cobblestones.

The views from the parapets atop the fortress are very impressive. Offshore is Sint Eustatius, a Dutch-controlled island with 3,000 residents and its own quirky charm.

The fortress features three 10.9kg cannons that overlook the Caribbean on the Western Place of Arms. The biggest cannons in the fort were able to fire balls up to 2.41km. The Eastern Place of Arms’ guns pointed at the mountains.

Visitors use a wooden bridge to cross a moat and enter the Fort George/the Citadel. The moat is part of a water catchment system that was constructed around the fort.

It is an architectural and engineering monument. The museum displays in the barracks are first-rate, although a bit eclectic.

The ruins of the barracks are a short walk from the grassy visitor parking lot.

At the foot of the hill is a historic lime kiln that was used to build the fortress. Just inside the gate is the Barrier Redan where four cannons were located to protect the entrance road. The Magazine and Prince of Wales bastions are both below the Citadel.

The first cannon was mounted on Brimstone Hill in 1690 by the British, part of a campaign to recapture nearby Fort Charles that had been seized by the French. The French had not thought it possible to haul cannons up the steep slopes of Brimstone Hill, which gets its name from nearby volcanic vents that can produce sulphur smells.

The British continued to add to the Brimstone Hill Fortress for the next 100 years. It had 49 cannons by 1736.

The fort was the centre of a major battle in 1782 between the British and the French over control of the Caribbean’s rich sugar cane islands.

About 8,000 French soldiers attacked the island and besieged the fort. It was defended by about 1,000 troops from the Royal Scots and East Yorkshire regiments plus local militia and escaped slaves. They defended the fort for a month before they surrendered.

A year later, the Treaty of Versailles returned the island of St. Kitts to the British. They added to the fortifications on Brimstone Hill. The French tried to capture the fortress in 1806 but failed.

The fort was damaged by a hurricane in 1843. In 1852, the British troops were reassigned and the fortress was abandoned. It gradually fell into decay.

Stabilisation and restoration efforts began on St. Kitts in the early 1900s. In 1973, Prince Charles reopened the first complete restoration at Brimstone Hill: The Prince of Wales Bastion. The fortress became a national park, and in 1992 the small visitor centre opened.

The fort is managed by the non-profit Brimstone Hill Fortress National Park Society for the Federation of St. Christopher (St. Kitts) and Nevis.

That’s the name of the independent government that oversees the two side-by-side English-speaking islands. They are 3.2km apart. It is the smallest independent nation in the Americas.

Volcanic St. Kitts with its 35,000 residents is about 386km southeast of San Juan, Puerto Rico. Sleepy Nevis (it’s pronounced Nee-vis), which places restrictions on development, is a 45-minute ferry ride from Basseterre.

St. Kitts was named by Columbus after his patron saint. Settled in 1623 by the English and the French, it was dubbed the Mother Colony of the West Indies because it led to the settlement of other islands by the two countries.

The natives called St. Kitts “Liamuiga” or the fertile land. The natives were wiped out in 1626 by a massacre at Bloody Point.

Today, the one-time sugar island features rainforests with a few resorts along Frigate Bay. It is a foodie island and tourism is growing. It once had 3,000 sugar plantations, although sugar was last harvested in 2005.

One of the biggest tourist attractions is a narrow-gauge railroad that offers 29km excursions: The St Kitts Scenic Railway.

Other attractions include the National Museum in Basseterre, the English-styled Circus with a reconstruction of a four-sided Victorian clock, and Independence Square, a one-time slave market from 1750. It is flanked by stone buildings once used to house slaves bound for market, and a rebuilt Catholic church that dates to 1670. – Akron Beacon Journal/McClatchy-Tribune Information Services