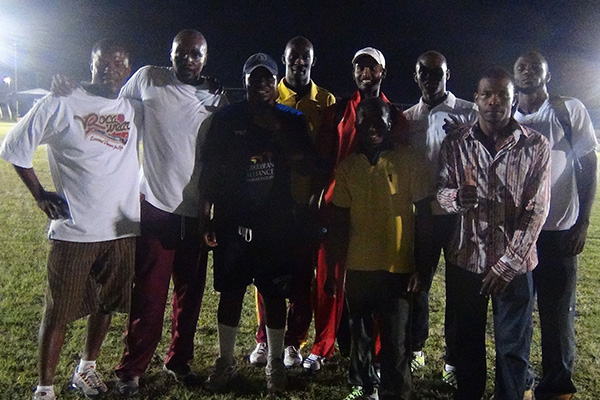 The excitement reached fever pitched at the ET Willet Park on the evening of Thursday 28th November.  It was the start of the tape ball cricket tournament hosted by the Nevis Sports Department and sponsored by the Development Bank of St. Kitts and Nevis.

After a series of preliminary matches between some of the teams registered for the tournament, it all came down to the grand finale between the Police team and the Brown Hill Legends.

The Law men batted first and compliments of their two star players, Huggins and Laborde, scored a competitive 16 in the allotted super over contest.

The sizeable and vociferous crowd waited in eager anticipation as Justin Athanaze and Kejel Tyson opened the innings for the Brown Hill team.  It promised to be an exciting conclusion to the knockout tournament as Athanaze had a few matches previously taken heavy toll of an over from Curtis Morton Jr to help his team win quite handsomely over the SDA Jets.

However, Laborde commenced an excellent over and a couple of crucial dot balls and a few scrambled runs were definitely not helping the cause of the Brown Hill team.

The fat lady was already singing loudly and the Police team supporters were already jumping behind the fence.  It was all over by the shouting.  With only one ball remaining, the Brown Hill team was on 5 for no loss and needing all of 12 runs from the only legitimate delivery remaining.  It was improbable, but was it impossible?

The Lawmen on the field realizing the situation also started applauding.  They knew that they had the trophy in their sights.

Laborde raced in to bowl the final delivery and opted to bowl a bouncer which went away, wide down the leg side, past the wicket keeper and into the fine leg boundary.  Five runs recorded and still one legitimate delivery remaining.

However, Brown Hill still needed all of 7 runs from the final delivery and their camp was as somber as if they were attending a funeral service.

Laborde raced in again to bowl to Kejel Tyson and just did not get the attempted yorker in the right slot and Tyson heaved big towards the Reliable Motors area—a huge maximum and then the Brown Hill camp erupted into shouts of celebrations.  Umpire Wendell MICEY Wallace had signaled a no-ball.  The seven runs had been secured and Brown Hill had pulled off one of the most stunning victories in cricketing history.

The general consensus of opinion was that the entire Police team should be locked up for throwing away a victory that was obviously theirs for the taking.

Brown Hill Legends therefore the 2013 Tape ball knockout champs and would be looking forward to winning in the regular league as well.

Earlier in the knockout tournament which saw both male and female teams competing in the super over competition, the biggest upset was created when Police defeated Pennyless All Stars in convincing fashion.  Huggins was the ultimate star as he pulled the first delivery from Tonito Willet over square leg for six and hit the final delivery over towards the Villa grounds for another huge maximum.

Laborde bowled a tight over, to effectively seal the fate of the more renowned All Stars team.