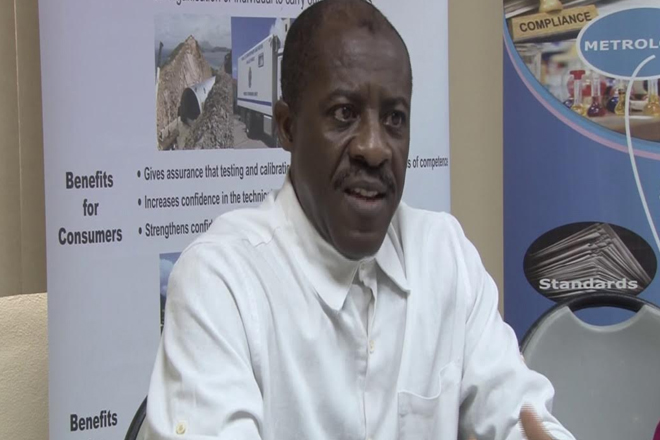 (SKNIS): The St. Kitts and Nevis Bureau of Standards (SKNBS) is currently taking part in a project involving training toward a procedures upgrade that will enable the facility to better protect the health of locals and inform entrepreneurs on preparing their goods for the international market.

The training which is dubbed “Enhancing the National Quality Infrastructure of St. Kitts and Nevis” is made possible through technical assistance from the Caribbean Development Bank (CDB) and will conclude in early March. It is being facilitated by consultant Dr. Ebo Budu-Amoako who explained that SKNBS already conducts various tests, however his job is to ensure that specific procedures are being followed.

“You have to take the samples in such a way that you don’t compromise the integrity of the sample, so there will be procedures and protocols for doing that,” Dr. Budu said. “When you bring it to the lab, you have to store it in a certain manner, because if you don’t store it properly then you continue to compromise the integrity because bacteria and micro-organisms grow at a certain temperature so you have to keep it at a certain temperature so that you maintain the level of micro-organisms that were in the product when you pick them up.”

Dr. Budu elaborated that strict quality control protocols have to be followed as well, when conducting the tests. He said protocols must be followed step by step and done in such a way that at the end of the test there is integrity.

Director of SKNBS, Hiram Williams, explained that procedures for certain tests, such as those for microbiology in terms of testing for food, including those for salmonella, listeria and E.coli will be addressed first. He explained the main objective of the training.

“It is important to do so, so that the service that we provide to consumers, our clients, is such that they are satisfied with the results,” Mr. Williams said. “These results would be internationally accepted. The idea again is to build consumer confidence to ensure that we are able to participate in global trade. Obviously, we want to know that whenever we test a product and that product is exported, the importers are satisfied that the testing that has been done for compliance to standards is accepted internationally.”

“These standards can be in the form of chemicals; it could be micro-organisms; it could be physical material,” Dr. Budu said. “These are called hazards in foods. They shouldn’t be in foods. So every type of food would have these standards. If you have chicken products, milk products you’re looking at salmonella, seafood then listeria.”

The consultant outlined that even foods prepared for export, such as jams would have to have certain codes with respect to the amount of moisture in it, the pH which is the acidity, the sugar content and so forth. “They all have to meet these standards in order to be called jam, for them to be placed on the market,” Dr. Budu said.