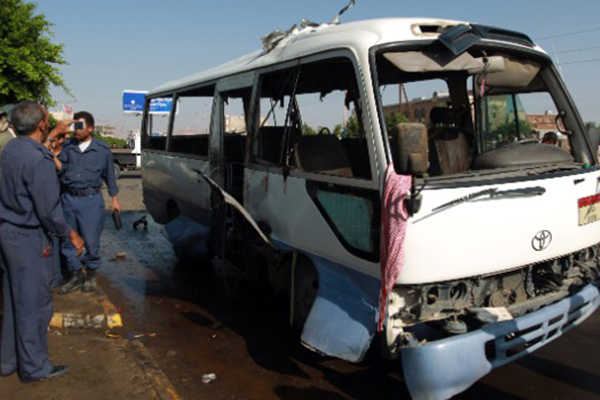 Sanaa, Yemen (CNN) — Two soldiers were killed and 14 others were injured Tuesday when a bomb planted under a military bus exploded in the Yemeni capital, Sanaa, authorities said.

The soldiers were on their way to work from another district of the capital.

Three of the injured are in critical condition, authorities said.

No one immediately claimed responsibility for the attack.

Violence continues on a daily basis in Sanaa, with thousands of troops still stationed on the streets.

“Security has deteriorated over the last two months, and people are worried. Troops are in the streets, but in the wrong place in the wrong time,” said Ahmed Bahri, a senior official in the opposition Haq Party.

Yemen is home to al Qaeda in the Arabian Peninsula, believed by many analysts to be the most dangerous affiliate of the terror network.

Al Qaeda has stood behind a string of attacks on government troops but denied responsibility for a bus explosion that killed five soldiers last year.

Tuesday’s bus blast is the latest incident to rock the Yemeni capital in less than a week.

On Sunday, two powerful explosions shook Sanaa, with one blast near the French embassy and the other near the Defense Ministry. Nearby houses were damaged and four civilians were injured.

The Supreme Security Committee said Monday that the explosions were caused by rockets launched from rural areas surrounding the capital.

Two Westerners, a German and a Briton, have been kidnapped in Sanaa in the past three days. The government says it has no information on their whereabouts. Neither embassy concerned has commented on the kidnapping incidents.

The German was studying Arabic at a language center in the old city of Sanaa, while the Briton worked in the development sector in Yemen, Interior and Foreign Ministry officials said.

Yemen has witnessed unrest since early 2011, when mass protests first broke out. Former President Ali Abdullah Saleh was forced out of power a year later, after 33 years in office.