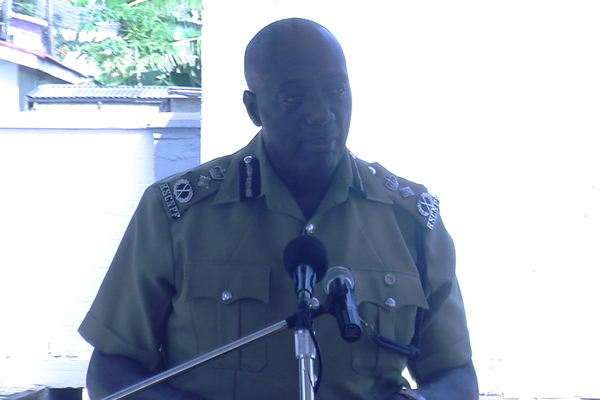 C.O.P. Walwyn Says Crime Is Lower Than In Previous Years

(ZIZ News) — The Federation’s Police Commissioner maintains that crime in St. Kitts-Nevis remains lower now than it was in previous years.

Dr. Celvin Walwyn was among the speakers at Wednesday morning’s handing over ceremony of a Mobile Command Unit and 10 Luxgen vehicles for the Royal St. Christopher and Nevis Police Force.

“We ask the public’s continued support as we continue to turn back crime in the Federation. And I know I said turn back crime and people are going to say but we have crime. As of today, I can tell you that crime is still down regardless of what you’re being told here in the Federation. I came here in 2011 and we have not returned to the pre-C.G. Walwyn numbers that we used to have,” he said.

Dr. Walwyn says he and his team remain grateful for the assistance from the government and other partners. He said such assistance aids in the continued decline in criminal activity.

“I want to thank the Anti-Crime Unit for their full support in our fight against crime in the procurement of equipment and training that we needed to fight crime. I want to thank the Coalition of Support for the St. Kitts and Nevis Security initiatives for their assistance along the way over the last 36 months. Without them, we could not have done a lot of things that we have accomplished in conjunction with the St. Kitts-Nevis government.

“We also want to thank the Marriott Foundation for this building that you see behind us. They spent over US$100 thousand to ensure that when we have our next academy class, will have a facility for the women who will be going through the academy. And overall, I want to thank everyone, especially the St. Kitts Nevis Defence Force, Colonel Wallace, for his assistance in helping us in our fight as we continue to turn back crime in 2015,” he said.