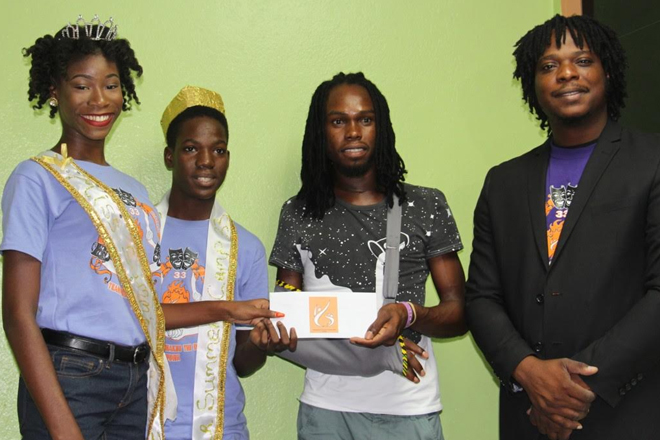 (SKNIS): Campers and leaders from the Department of Youth Empowerment’s 33rd Annual Summer Residential Camp made a $5,000 donation to the Timoy Henry relief fund on Thursday (August 11), signaling their love for the 27-year-old who has been with the camp since 2002.

The proceeds were raised during the Camp’s Talent Show and also from the Business Development Programme. Camp Director, Pierre Liburd, spoke about Henry’s contribution over the years.

“Timoy has been a part of the Annual Summer Residential Camp since about the age of 13 as a camper, and went on to start serving as a dorm leader when he was 17-years-old,” he said. “We are glad to be able to present this to you to help with your medical expenses.”

The winners of the talent show; King Jahavid Allen, 14, and Queen Tyannah Richards, 15, reflected on their experience with Mr. Henry over the years.

“I’m proud to say as a camper that he’s been a great role model and he is a really good singer,” said Jahavid, adding that Henry often uses his creativity to produce the camp jingle. “He’s funny and he usually makes jokes with the campers, about how we [look when] we wake up.”

Queen Tyannah said she felt “awesome” that she was chosen to present the funds to Mr. Henry.

“I had plenty fun times with him. We use to go powdering. I got powdered a few times myself,” she said, citing the innocent prank of sprinkling powder on the faces of sleeping campers and leaders. “I felt that it was really good that we were [able] to help because he was an awesome dorm leader; he was one of the best, my personal favourite.”

The Annual Summer Residential Camp was held at the Beach Allen Primary School from July 17 to 31.