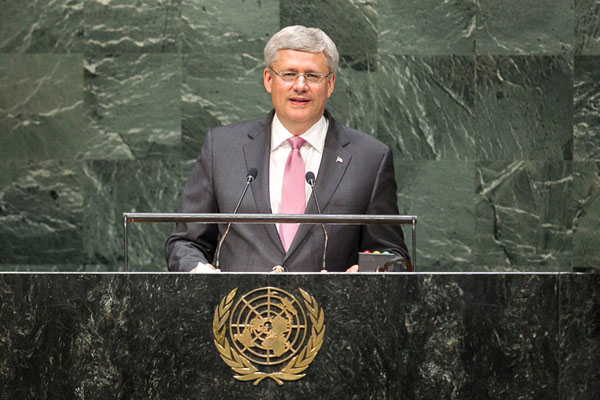 The laws will also allow anyone suspected of being involved in a terror plot to be detained without charge for up to seven days, and empower Canada’s spy agency to thwart attacks directly in a significant expansion of their powers.

Work on the law began in October after a gunman killed a soldier at Canada’s national war memorial and then stormed Parliament. The attack in Ottawa came two days after a man, said to be inspired by the Islamic State group, ran over two soldiers in a parking lot in Quebec, killing one and injuring the other before being shot to death.

Under current law it is a crime to make a specific threat. The new law will make it a crime to call for a terror attack against Canadians generally. It includes any public threat including online.

“We cannot tolerate this any more than we tolerate people that make jokes about bomb threats at airports,” Harper said. “Anyone engaging in that kind of activity is going to face the full force of the law in the future.”

The penalty will be a maximum of five years in prison. Authorities will also be able to remove terror-related material from any Canadian website.

Under the current law those suspected of being involved in a terror plot can be detained for up to three days. The new law extends that to seven days provided police get a judge’s permission.

The new law will also allow the Canadian Security Intelligence Service, the country’s spy service, to directly approach terror suspects in order to disrupt their plans. CSIS is currently permitted only to collect intelligence and pass the information on to police.

The spy agency will now be able to cancel plane or other travel reservations made by Canadians suspected of being involved in terrorism. The new activities by CSIS will require approval by a judge. Police already have many of these powers that CSIS will acquire but the government wanted the spy agency to be able to act right away if they see a threat.

The new laws have to be passed in Parliament but Harper’s Conservative government has a majority of the seats so passage is all but ensured.

Harper said jihadists have declared war on Canada and it would be a grave mistake to ignore their threats.

“Over the last few years a great evil has been descending upon our world, an evil that has been growing more and more powerful, violent jihadism,” Harper said. “It is one of the most dangerous enemies our world has ever faced.”