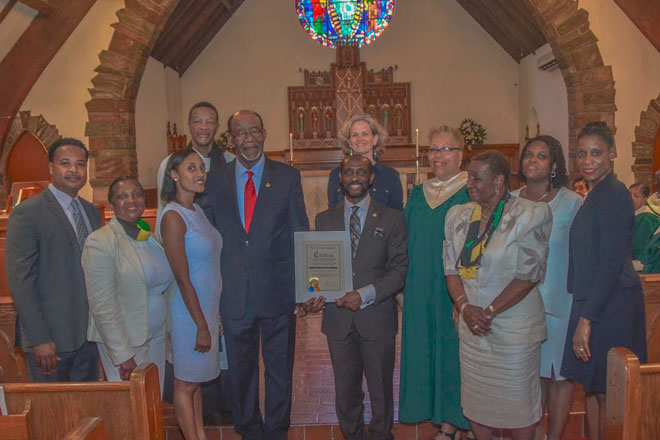 His Excellency Sam T. Condor, Permanent Representative of St. Kitts and Nevis to the United Nations, continues his mission of outreach with nationals in the Diaspora, as well as with his Caribbean counterparts. This time, the Ambassador was the featured guest speaker at the Transfiguration Episcopal Church Ecumenical Service on Sunday June 5, 2016 in Freeport, New York in honor of Caribbean-American Heritage month.

The Long Island Caribbean-American Association has been hosting the Ecumenical service for the past six years. The goal of the anniversary service was to focus on mending fences and building bridges among Caribbean nationals, with a view to engender better Caribbean and American relationships. This year’s anniversary celebration included a small group of worshippers comprising nationals of Guyana, Grenada, Trinidad, Barbados, Jamaica and St. Kitts and Nevis.

In his brief address, Ambassador Condor expressed his sincere gratitude to the Association for the invitation in celebration of Caribbean-American Heritage month, noting that President Obama’s proclamation of the month long celebration ought not to be taken for granted. “We celebrate the contributions of our Caribbean-American brothers and sisters, and we reflect on how they have bolstered our country and enriched our traditions. This month, let us honor the resilient heritage and rich history of Caribbean-Americans, and let us reflect upon the diversity of experiences that unites us as a people,” states President Obama in his proclamation.

Ambassador Condor supported President Barack’s proclamation by adding, “As Caribbean nationals, we beam with pride in reflection of the seemingly insurmountable obstacles that our ancestors overcame. We are mindful of the numerous sacrifices mothers and fathers made to provide opportunities for their children.”

Condor too expressed confidence in the successes of Caribbean nationals abroad by speaking to their value and how their contributions have also integrated other communities, thereby helping to create economic, social and political prosperity in their adopted homes, such as America.

Ambassador Condor thanked the President of the Long Island Caribbean-American Association for inviting him to deliver a message of promise and hope for all people, but especially for nationals of Caribbean and American heritage. He vowed to return to the community to see the continued blossoming of the work of Caribbean and American nationals in the Long Island area and across the North East.

Musical accompaniment was provided by the youthful and talented Quincy Dover.

Guests used the opportunity to fellowship with each other following the service.