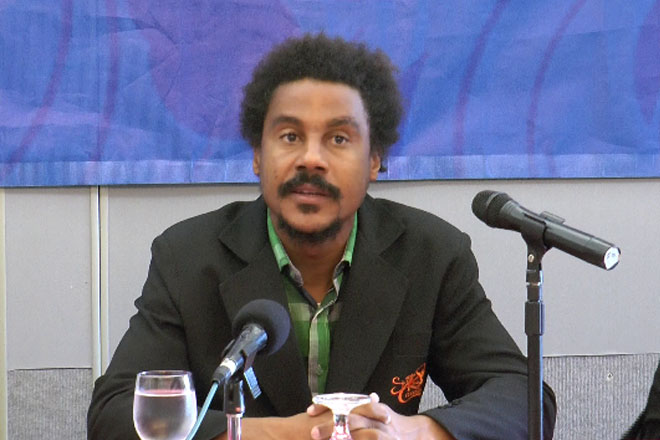 Monday’s press conference followed an incident on Saturday where a handful of artistes competing in this year’s competition together with members of the Bacchanalist Band spoke out on radio against the Carnival Committee’s decision to replace Bacchanalist with the Three Lugs Band, to provide backup music for soca tents.

Carnival Chairman Noah Mills used the press conference to explain what led to the initial replacement of the band noting that “It was agreed that a minimum of four tents for the soca part of Carnival would have been held” with three in St. Kitts and one in Nevis.

He said “At that time, we even booked tentative dates and suggested potential venues. Now since then, several things have developed and at one point, it was directly told, I think after the second tent, that the Bacchanalist Crew would not be available to continue providing the full bundle of services.”

When asked if he believes the semi-finals and finals will be affected, Mills said, “I have seen no documentation saying all artistes, I have heard of no such forum where all artistes have asked for a replacement or substitutions” but added that “assuming that once we contact the Bacchanalist Crew and they are available to continue and assuming that the artistes come tomorrow agree, not only those who would have signed asking because I would assume they would say yes, the others say yes Bacchanalist Crew is fine, I do not see a problem going forward.”

Mills made it clear however that he was never presented with a petition that was signed by the soca artistes.

Meanwhile, Leader of the Three Lugs Band, Anthony Bartley announced that they will step aside to allow the Bacchanalist Band and the Carnival Committee to work out their differences.

Members of the Carnival Committee, along with Deputy Prime Minister and Minister of Culture the Hon. Shawn Richards, are expected to meet with the competing soca artistes on Tuesday.

While there, ZIZ News spoke with two soca artistes, Mr. Bagnall and Mr. Hype, who said the entire situation could have been avoided if their concerns were addressed.

“I want to commend the Three Lugs Band. I didn’t really have a problem with the band until Friday when I heard them play and I said no, we cannot go through with this, it’s gonna kill the soca so I want to commend them for basically stepping down and giving the Bacchanalist Crew or any other band a chance to back up the artistes in the Soca Monarch Competition,” Mr. Bagnall stated.

Mr. Hype said, “I think it was a bit unfortunate that it had to end up like that, I don’t think it really should have. The artistes have been voicing their concerns for some time now and if only persons took the time to only sit and listen and just at least hear the concerns of the artistes, I don’t think any of this would have over spilled like how it over spilled.”

However, both Mr. Bagnall, who is the defending Groovy Soca Monarch, and Mr. Hype have expressed their intentions of competing in the upcoming events.

The Soca Monarch Semi-Finals is scheduled for Friday 18th December, with the finals taking place on Wednesday December 23rd.