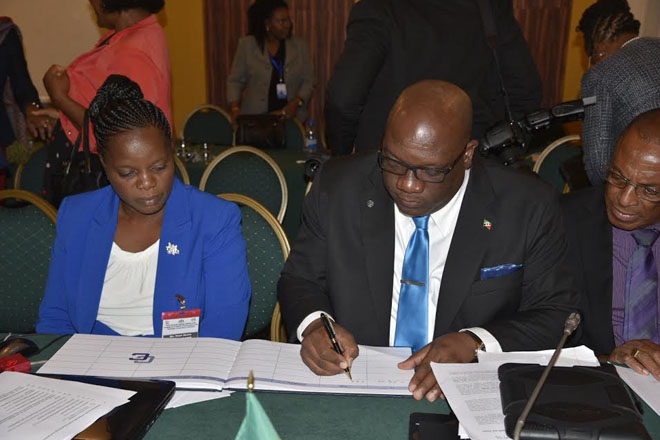 Yesterday’s caucus session ended around 10:00pm. The session focused on regional security matters, citizenship-by-investment programmes, free movement and facilitation of travel within the Caribbean Community, as well as correspondent banking, and ended with a discussion of cricket. This morning, the Heads of Government resumed their discussion of cricket in caucus then moved on to matters relating to border issues.

Prime Minister Dr. the Honourable Timothy Harris weighed in on this issue at the UWI Cave Hill Campus on March 31st.

“You must have heard the ongoing and deepening concern within the region regarding the issue of correspondent banking, how small and large states within the family of CARICOM, such as Belize and Montserrat, are losing correspondent banks,” Prime Minister Harris said, adding, “Who is next? This is a matter of concern because you are aware that without the correspondent banking relationships we become blockaded, in real terms, from participating with the rest of the world. We would be unable then to participate in an arena in which we must participate, if we are to survive. So this is a troubling matter and calls into play how we as a region will restructure our economies.”

Dr. Harris also addressed the mostly student audience on the matter of Free Movement and Facilitation of Travel within the Caribbean Community, explaining in very relatable terms what it means for them as future graduates.

“Perhaps the best test case for regional integration and its corollary socio-economic benefits is the close-knit group of friends, which you have made already in the hallowed hallways of the UWI, that is a critical resource for you moving forward and hopefully you shall continue to hold near and dear as time goes on, long after your graduation. Through regional integration, you may end up living on the same island as your friend sitting next to you. That is one of the direct rewards of regional integration, because when we look at some of our economies and the reality that some countries have unemployment officially put at 30, 40%, particularly among young people, many of you know there is no going back home for work,” the Prime Minister of St. Kitts and Nevis said.

Prime Minister Harris encouraged the students to take advantage of opportunities in other Caribbean islands where the unemployment rate is not as dire as it might be in their country.

“So there are other countries that right now are doing well and which provide you with the probability for work, and that is why you have to be prepared. You have to come to the point of not seeing yourself solely as a citizen of Barbados or St. Lucia or St. Kitts and Nevis,” Dr. Harris said, adding that, “You have to now see yourself as a citizen of the region where already there is an institutional framework that gives you the right of free movement, that gives you as a graduate a special privilege and opportunity to move across the single economic space and to set up business, and with that comes a host of contingent and other rights.”

Also on the agenda at caucus today are issues related to CLICO/BAICO and the Caribbean Court of Justice. Relations with the Dominican Republic are currently being discussed in the caucus session.