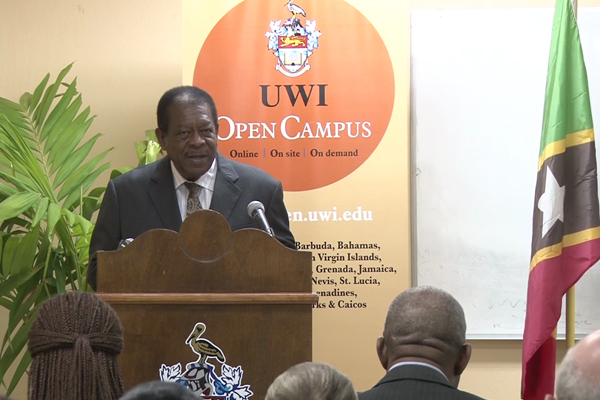 CCJ President: The Impact and Influence of the Magna Carta on Caribbean Law

Basseterre, St. Kitts (SKNIS) — President of the Caribbean Court of Justice (CCJ), Sir Charles Michael Dennis Byron, recently presented a lecture at the University of the West Indies (UWI) Open Campus, which underscored the impact and influence of the Magna Carta on Caribbean law.

The lecture was in celebration of the 800th anniversary of the Magna Carta (Latin for Great Charter), a legal instrument that was issued under the authority of King John of England in 1215. It is an instrument upon which many constitutions, including those in the CARICOM region, are based.

Sir Byron explained that the instrument “is known for promoting judicial integrity and impartiality and forbade the denial of justice and its delay to all citizens.” He added that“it laid the foundation for the protection of the right to life; the right of personal liberty; the right to the protection of property; the right not to be arrested or imprisoned, outlawed, destroyed or put upon in any way except by the lawful judgment of one’s peers or the law of the land.

“It stands for what has become one of the most fundamental and immutable tenants of law and namely that no one is above the law,” said Sir Charles, who commented that it is interesting that, though established 800 years ago, it has captured the concept that justice is local and that a person was entitled to the judgment of their peers.

He further explained that the Magna Carta is part of the history of the struggle between power and freedom and had become a symbolic argument “in the fight to develop parliamentary democracy in 17th century England.”

“The traditions developing from that have laid the pillars and foundation for constitutional evolution in Britain.”

Sir Charles explained that in the Caribbean, in most of the former British Commonwealth colonies, the Magna Carta is attributed to be the most significant landmark on the route to establishing the rule of constitutional law and that it has influenced Caribbean jurisprudence and Caribbean constitutions.

“Even though it found expression in Caribbean constitutions, there wasn’t any constitution in England, although there are some commentators that would equate the Magna Carta with a sort of British constitution.”

Some features of Caribbean constitutions include generally constraining the actions of the organs of state whether the executive, the legislature or the judiciary and ensures that no one is above the law. They balance the enjoyment of individual rights with a public interest and determine the mechanisms through which sovereignty is exercised. The constitutions articulate core values such as a commitment to parliamentary democracy, constitutional supremacy, to the separation of powers to judicial independence and the rule of law.