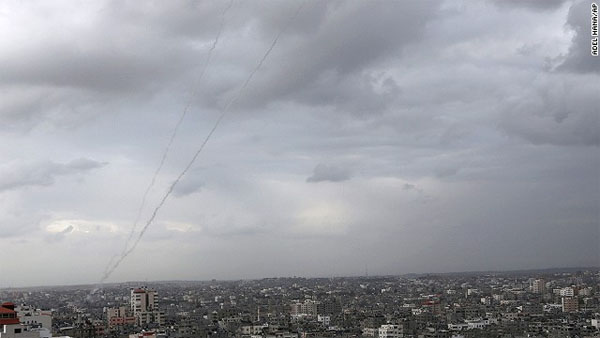 Gaza City (CNN) — After two days of rocket fire from Gaza into southern Israel and attacks by Israel on Gaza, a cease-fire has been declared, an Islamic Jihad leader told CNN on Thursday.

“We have agreed on an Egyptian-brokered truce — as long as Israel commits to it,” said the leader, Khaled Al-Batash.

A spokesman for Israeli Prime Minister Benjamin Netanyahu said he had no reaction.

The announcement came shortly after four Palestinian residents were critically wounded in an airstrike on tunnels near the southern Gaza city of Rafah, Palestinian medical sources told CNN.

Since Wednesday, about 65 rockets have struck Israeli territory, five of them hitting populated areas, the IDF said.

IDF spokesman Lt. Col. Peter Lerner said Thursday in a statement that there had been “a substantial deterioration” in the safety of southern Israel’s residents. “We have responded and will continue to do so in order to eliminate threats as they develop. This is our obligation and responsibility to those exposed to Gaza terrorism.”

The statement said that 46 rockets hit southern Israel all of last year and that 90 rockets have hit Israel so far this year.

On Wednesday, the military wing of the Palestinian Islamic Jihad, called the Al-Quds Brigade, said it had fired dozens of missiles on Israeli settlements.

In response, Israel launched airstrikes on three areas in Gaza — Rafah, Khan Younis and Jabalia — that are believed to belong to Islamic Jihad, according to security sources in Gaza. A Hamas spokesman texted CNN to say the group counted six airstrikes but said they were against empty bases.

In all, the Israeli military targeted “29 terror sites” in Gaza, the military said on its Twitter page.

“In today’s attack, 41 rockets struck in Israel, five hit populated areas and three were intercepted by the Iron Dome defense system,” the military said in another statement. “This is the most substantial rocket attack from the Gaza Strip since Operation Pillar of Defense in November 2012.”

Islamic Jihad and Hamas, which is the Palestinian movement running Gaza, had evacuated their military and civilian institutions in anticipation of Israeli reprisals, the security sources in Gaza said.

After the attack, Israeli Foreign Minister Avigdor Liberman told Israeli army radio that “the position of my party Israel Beitanyu is that we support the full occupation of the whole of Gaza in any possible future action.”

Liberman opposed a response short of full occupation. “I am against a limited operation,” he said.

Netanyahu was asked for his reaction to Liberman’s comments at a joint news conference with Britain’s Prime Minister David Cameron on Wednesday evening in Jerusalem.

“If it is not quiet in southern Israel, it will be very noisy in Gaza,” Netanyahu said in Hebrew.

Palestinian Authority President Mahmoud Abbas has called for Israel to stop the “military escalation on the besieged Gaza Strip, considering that this escalation will put the isolated residents in the danger of the war and destruction,” presidential spokesman Nabil Abu Rudeineh said through the official Wafa news agency.

“The Gaza Strip is constantly being targeted by Israeli airstrikes that targeted many areas,” Rudeineh said.

Hamas-run Al-Aqsa TV flashed a banner stating: “The occupation bears the full responsibility regarding this wave of aggression and the ongoing escalation.”

Abu Ahmad, a spokesman for the Al-Quds Brigades, said the rocket fire came “after a long series of violations to the truce with the Palestinian resistance since November 2012.”

“This operation, dubbed ‘Breaking the Silence,’ comes as a response to the ongoing and continued Zionist Israeli aggression against the Palestinian people in the West Bank and Gaza,” Ahmad said.

Israeli Defense Minister Moshe Yaalon ordered a halt to the shipment of goods to Gaza through a crossing on the Gaza-Israel-Egypt border until security assessments are made, the military said in statement.

However, another crossing will be open for humanitarian movements, the military said.

U.N. Secretary-General Ban Ki-moon condemned the rocket attacks from Gaza on Israel and urged restraint by all parties to prevent an escalation of violence and destabilization of the region, a spokesman said.

Israeli Apache helicopters flew over Gaza City on Wednesday after rockets were fired from the Palestinian territory at the Israeli town of Sderot, officials said.

On its website, the Al-Quds Brigade said it had fired 34 rockets and 14 mortar rounds at “Zionist targets.”