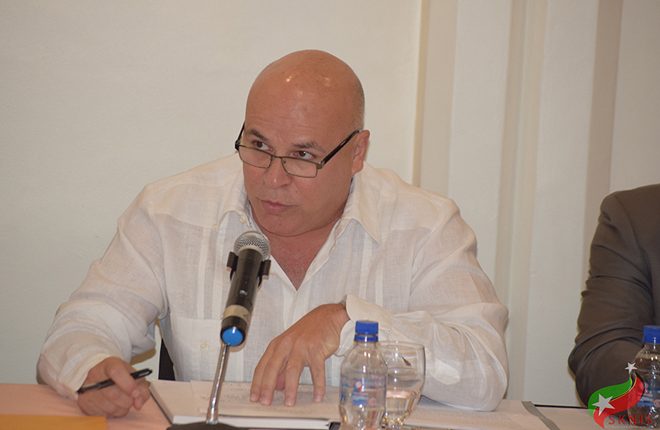 Chamber president encouraged by the 2018 budget; confident capital projects will stimulate the economy

(Press Unit in the Office of the Prime Minister) – President of the St. Kitts and Nevis Chamber of Industry and Commerce (CIC), Mr. José Rosa, is confident that the capital projects and programmes outlined by Prime Minister and Minister of Finance, Dr. the Honourable Timothy Harris, in the 2018 Budget Address will further stimulate the local economy.

Prime Minister Harris introduced and moved the first and second readings of the Appropriation (2018) Bill, 2017, of just over EC$700 million in the National Assembly of St. Kitts and Nevis on Wednesday, December 6, 2017. The bill provides for the provision of services of St. Christopher (St. Kitts) and Nevis for the upcoming financial year commencing January 1, 2018, and ending on December 31, 2018.

Dr. Harris said that the implementation of the plans and programmes in 2018 is intended to improve the delivery of public service, contribute to the increase in growth in the economy and improve the quality of lives of all citizens of St. Kitts and Nevis.

Speaking with the Press Unit in the Office of the Prime Minister today (December 7), Mr. Rosa said the most important thing for the Chamber is the fiscal responsibly exercised by the Government in the Budget.

He said, “I think that the Budget in general that was presented is balanced, meaning that the expenditure is not going to weigh more than the expected revenues, which means that the Government will be able to get a surplus.”

Once executed, the Chamber president strongly believes that the capital projects outlined for 2018, including the start of construction work on the second cruise pier, rehabilitation of the Old Road Fisheries Complex, the continued roll out of the Unity Housing Solution Programmes and the upgrade of the Island Main Road, “are very important for the stimulation of the economy, especially the construction area of the economy.”

During his presentation, Prime Minister Harris said his Government is giving serious thought to St. Kitts and Nevis becoming a more competitive tax jurisdiction, adding: “In this regard, we will evaluate the possibilities for further reducing Corporate Income Tax rate from where it is now at about 33 percent to around 30 percent – further good news for the business community.”

Mr. Rosa said the Chamber welcomes this intervention by the Team Unity Government. He added, “We encourage the Government to do that analysis quickly because that also would stimulate the economy—the businesses would grow, we would have more money to spend, more money to put into capital projects and we would revitalize the economy.”

Mr. Rosa disclosed that the Chamber of Industry and Commerce also welcomes the Government’s intention to host a CBI Conference in the first half of 2018 that will allow all stakeholders an opportunity to discuss the future of the programme.