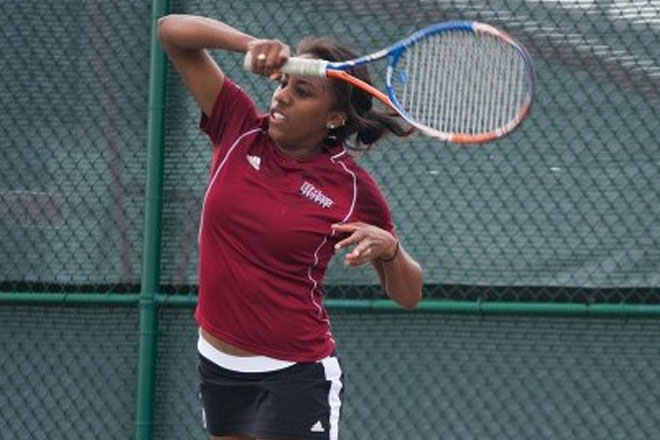 Fast-forward to this season and it appears Podlofsky’s tenure at the top of the UMass record book is already coming to an end.

Chanel Glasper, senior captain of this year’s team, has had an illustrious career of her own and it is now her turn to seize the spotlight and solidify her legacy as one of the most successful Minutewomen of all-time.

After a three-set tiebreak win (5-7, 6-0, 4-3) against Albany on Saturday, Mar 28, Glasper pushed her singles win total to 73, just one victory behind her former teammate. With four regular season matches left, both Glasper and UMass coach Judy Dixon are confident the record is as good as broken.

“It still hasn’t really sunk in,” Glasper said. “It’s just something that I never really fathomed would happen when I came here four years ago.

“We were talking about it last year, that it was a possibility. (Podlofsky) was trying to get all the wins she could to make it hard on me, so I can’t wait to call her up and give her a hard time about it. But I can’t even really put it into words. … I hope the team is really successful but I hope no one breaks it for a while.”

Glasper’s road toward breaking Podlofsky’s record started long before she even stepped onto the UMass campus.

“I started (playing tennis) when I was four years old,” Glasper said. “My dad put me in the sport because he knew that I was going to be tall and he wanted me to play an individual sport. …When I was growing up, I also played soccer and basketball but this was all before age 11, so it wasn’t really serious.”

By the time she turned 11, Glasper had focused her attention on tennis. Between practicing and watching Venus and Serena Williams and Andre Agassi on television, Glasper dedicated much of her youth to the game she loved until she was recruited by Dixon as a highly touted prospect out of Plano, Texas.

She eventually made the jump to the East Coast to become a Minutewoman. Once she arrived on campus in 2011, Glasper proved she was ready to make a major impact on the team immediately.

“When I came in my freshman year, I felt like the typical freshman: wide-eyed and really energetic and thinking I could win everything,” Glasper said. “I set the bar really high for myself.”

And set the bar she did.

In the fall semester it was a little hard being the only one. I realized that I didn’t have anyone to defer to, to bounce ideas off of, to help me out but one of the juniors this year, Arielle (Griffin), has really stepped up and been helping me and I’ve been bouncing ideas off of her. She brings a great work ethic and energy so it takes a lot of pressure off of me.”