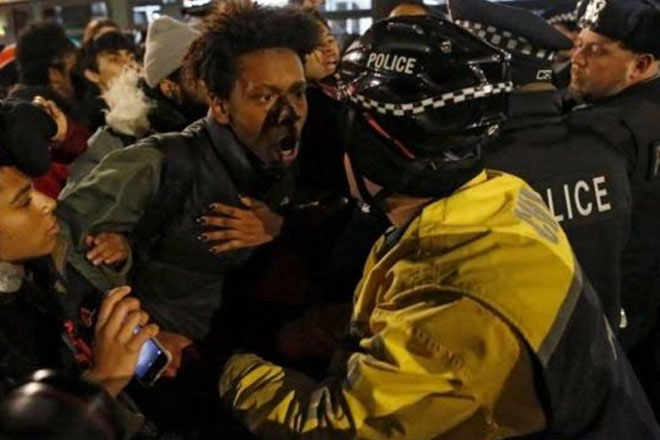 Officer Jason Van Dyke has been charged with first-degree murder for killing Laquan McDonald, 17. Police say he refused to drop a knife.

Mr Van Dyke said through his lawyer and police union he had feared for his life.

Chicago Mayor Rahm Emanuel has appealed for calm in the city.

After the video was released, several hundred people held a march in Chicago, blocking traffic. During a tense but largely peaceful demonstration the crowd chanted “16 shots”.

Police use of excessive force against African Americans has been the subject of nationwide protests for months.

“It is fine to be passionate but it essential to remain peaceful,” Mayor Emanuel told a news conference.

Chicago has been preparing for possible protests ahead of the release the police dashcam video.

In Minneapolis on Monday night, one of those protests was marred by violence when three white men opened fire at a rally, injuring five people.