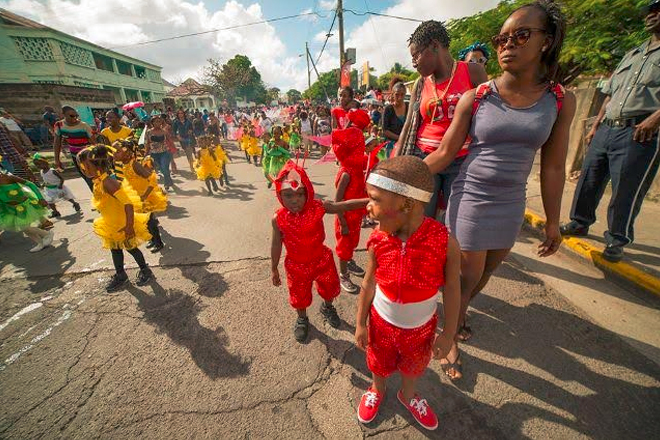 Children Light the Streets of Basseterre for Junior Carnival Parade

(ZIZ News) – Downtown Basseterre was filled with colour as hundreds of school children took part in the 2015 Junior Carnival Parade.

In previous years, the parade was divided into sections based on schools or zones, but this year, students from 19 schools were given the chance to join any of the troupes provided.

The troupes for the pre-school students depicted plants and flowers, fairies, and bees.

For the primary school troupes, the sections were “Ocean Beauty”, “I Grant You Life”, “Dusk to Dawn”, “Secret of Wings”, and “We Soar”.

For several weeks leading up to the parade, members of the National Carnival Committee visited the schools with a preview of the costumes to drum up interest and recruit participants.

Earlier, Marketing representative for the parade, Unoma Allen told ZIZ that the goal was to give the children a memory that would last a lifetime and stories that they could pass on to their children.

The parade began at the Clarence Fitzroy Bryant College, travelled through the streets of Basseterre and ended at Independence Square.