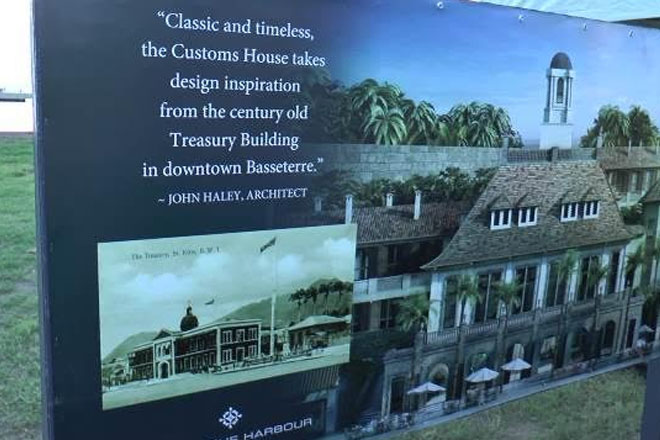 (ZIZ News) – On Tuesday afternoon, government officials, staff at Christophe Harbour, representatives of the Customs and Excise Department and general well-wishers gathered under a tent on the South East Peninsula for the ground breaking ceremony, signalling the start of construction of a Customs House for the Christophe Harbour Marina.

Chief Executive Officer, Buddy Darby, described his company’s Marina as the cornerstone for the yachting story of St. Kitts and Nevis.

The design for the Customs House, he said, drew inspiration from the Old Treasury Building in Basseterre and is set for completion in late 2016.

“Once complete, the Customs House will define Christophe Harbour and St. Kitts and Nevis to the West Indies and to the world,” Darby said adding that “With an investment of more than $100 million in the marina alone, we remain steadfastly committed to a successful future for this great Federation.”

The country’s Public Infrastructure Minister, Hon. Ian Liburd said the government acts as a facilitator to companies such as Christophe Harbour, noting that public-private sector partnerships are necessary to the overall development of St. Kitts and Nevis.

“We are in the process of completing the South East Peninsula road that goes down to Major’s Bay. Our role as a facilitator as well will include the regulatory framework, good governance and institutional structures and of course, we would ensure as a government, social, economic and environmental sustainability,” Minister Liburd said, noting that safety and security is of paramount importance to his government.

Tourism Minister, Hon. Lindsay Grant described the facility as essential to the yachting sector and made mention of the Yachting Development Forum that was held earlier that day.

He said, “Today’s events is in keeping with Team UNITY Government’s thrust to develop the yachting sector and bring increased revenue to the Federation. In February of this year, the Marina at Christophe Harbour was officially opened and today, we see the opening of the Customs House which will house officers when yachts dock at the Marina and this marks a very significant step in this development.”

According to the company’s website, the facility “signalises the first phase of the Marina Village and will accommodate the customs and immigration services, noting that a crew lounge, fitness centre, services for yachting guests, real estate sales and marina services have been incorporated into the design.”