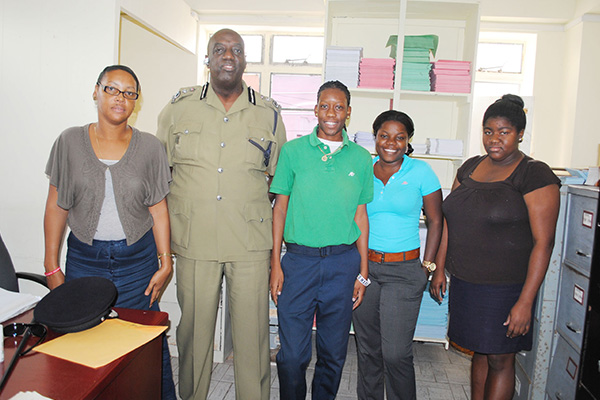 Basseterre, St. Kitts— Commissioner of Police for the Royal St. Christopher and Nevis Police Force Mr Celvin G. Walwyn has given a thumps up to the People Employment Programme (PEP) as it has afforded him the opportunity to deploy more police officers on the streets.

Commissioner Walwyn, who has been at the helm since September 1, 2011, observed that after he was introduced to PEP, he saw a need for it and he contacted its Project Manager, Mr Geoffrey Hanley, and requested some persons to help him (Commissioner) facilitate what he was doing in his attempts to reduce crime within the Federation.

“As a result of our engagement, Mr Hanley was able to afford me certain persons who I could use in civilian capacity and remove police officers who were doing those jobs and place the cops back on the streets,” said the Commissioner of Police. “So for that I am very grateful to the People Employment Programme.”

He noted that when in the past a person went to the Crime Records Office to get a police record, they would be served by police officers.

“We have been able to take the police officers out; just kept one,” explained the Commissioner. “We took the other police officers out and we have replaced them with PEP workers. They are now trained to produce the records that the people are coming to get.”

According to the Commissioner, the same thing was done at the Scenes of Crime Unit, where they have three young women from the People Employment Programme who are assisting Lieutenant Ancil Alexander with the records for finger prints and identification instead of having three police officers sitting there.

One of the three, Ms Melissa Mason now operates the Automated Fingerprints Identification System (AFIS), while Ms Shaunice Vaughan and Ms Glennor Henry are involved in data entry and also with filing.

The commissioner observed that they recently expanded the Scenes of Crime Unit, where they have had a lot of training with regards to crime scene preservation and the prevention of crime scene contamination.

“I was very happy when a young man, Mr Ciaran Phillip, who has a Masters Degree in Forensics came through PEP and came to the Police Force and now we are not only using PEP in certain areas, we are using PEP to capacity build.”

According to Commissioner Walwyn, as time goes on, Mr Phillip will be removed from PEP and be given a permanent job with the Police Force. “But if it were not for PEP I would not have met him. PEP has been very beneficial to the Police Force in many areas.”

“That is the basis of PEP,” stressed the Commissioner. “It is to try to train people so when positions become available, they are the first ones considered for that position and that is what we are doing here at this police station.”

There are 20 PEP workers at the Police Station, with some are working in the Commissioner’s office where they are being trained administratively in handling documents, and assisting with finance and with that training, when there are slots open, they will be given first consideration.

On being asked if PEP workers had displayed the high level of discipline expected by the Law Enforcement agency, his reply was: “I will be very honest with you; I have only had one person that I have had to speak to, a female, and then we had another young man that we had to release and it was for his own personal reasons. As far as them obeying and doing what they are told to do, we do not have any problems.”