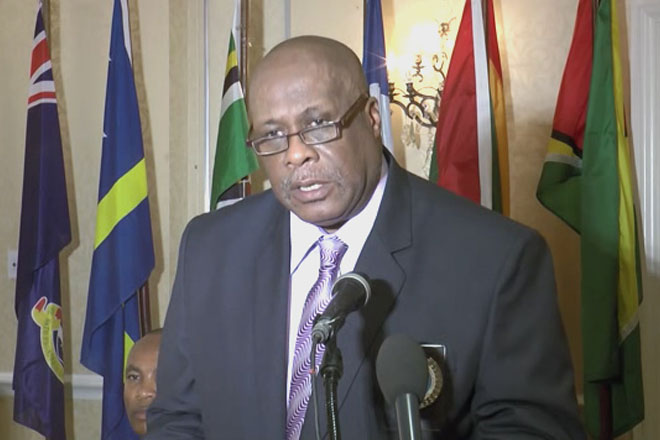 (ZIZ News) — The 30th Annual General Meeting and Conference of the Association of Caribbean Commissioners of Police got underway on Monday with an opening ceremony at the Marriott Resort.

The event began with a parade of countries and an introduction of the representative commissioners and senior police officers.

The law enforcement officials are in the Federation to discuss the best ways to advance community policing efforts within the Force and the community.

“Other various countries are plagued by rising incidents of youth and gang violence and a lack of direct evidence and support from citizens for various reasons. Community policing therefore provides an avenue for law enforcement to develop proactive approaches and community partnerships to address public safety concerns,” Liburd said.

President of the Association of Caribbean Commissioners of Police, David Baines said the conference and similar regional meetings are critical because cooperation is key in the fight against crime.

“The collective experience in this room has ensured that what challenges and threats emerge we are able to address those threats quickly with solutions, tactics and new legislation, whether it’s relevant and important. No one country has a monopoly on what works. Collectively we avoid wasted effort and have a better chance of embracing all that has work and that has been tried,” Baines said.

Prime Minister Hon. Dr. Timothy Harris described the conference as timely as his government explores ways of boosting the performance of the Federation’s police force.

“There are many political and economic, social and legal issues that command our attention at this time but implementing structural and operational change so that the police can better serve our communities is among our critical priorities. Such reform is necessary in response to changes in our society and the problems that may emerge as a consequence,” Dr. Harris explained.

The four-day conference is being held under the theme “Community policing….delivering quality policing service”.

The conference also entails workshops involving community groups and other members of society to discuss their role in community policing and reducing of crime.