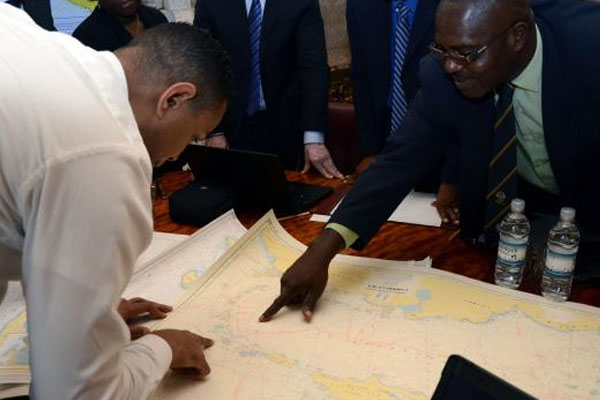 Basseterre, St. Kitts–The first round of discussions to settle the maritime boundary between St. Kitts and Nevis and the island of St Eustatius – a special municipality of the Netherlands – have begun in London at the Commonwealth Secretariat.

The Commonwealth is assisting St Kitts and Nevis to resolve its outstanding maritime boundaries with five neighbouring countries in the Caribbean region. Delegations from St Kitts and Nevis and the Netherlands met on Tuesday, 29 October at the Secretariat’s headquarters.

For many small island countries such as St Kitts and Nevis, access to natural resources has and continues to play a critical role in shaping their economic and social development. The demands of growing populations coupled with a desire by governments to reduce dependency on foreign natural resources, particularly oil, gas, and minerals, have compelled many countries throughout the world to renew efforts to explore for and develop their natural resources, including fisheries resources and offshore oil, gas and mineral reserves of the seabed.

By delimiting their maritime boundary, countries are able to manage their areas of ocean without affecting their neighbours’.

Sidney Kemble, Senior Legal Counsel for the Netherlands’ Ministry of Foreign Affairs, said delimiting boundaries was important for fisheries and the respective coastguards to know where they had authority.

McClean Hobson, St Kitts and Nevis Director of Maritime Affairs and Chair of its maritime boundary negotiating team said: “It’s critical for us to delimit our maritime boundary because it will lead to effective marine resources management and good international relations.

“There is also a large focus by our government on alternative energy and by delimiting our maritime boundaries it would give us the opportunity to do exploration as it relates to renewable energy such as hydrocarbon and geothermal.”

Mr. Hobson continued that St Kitts and Nevis’ maritime boundary negotiation team have received training by the Commonwealth Secretariat and technical assistance so they could play an active role in the whole process.

Joshua Brien, Head of the Secretariat’s Economic and Legal Section, and Legal Adviser Rosemarie Cadogan both noted that the discussions ‘proceeded beyond expectations with broad agreement reached on the course of the boundary’.

The next round of negotiations will be held in early 2014 with the aim of finalising the boundary at treaty level.