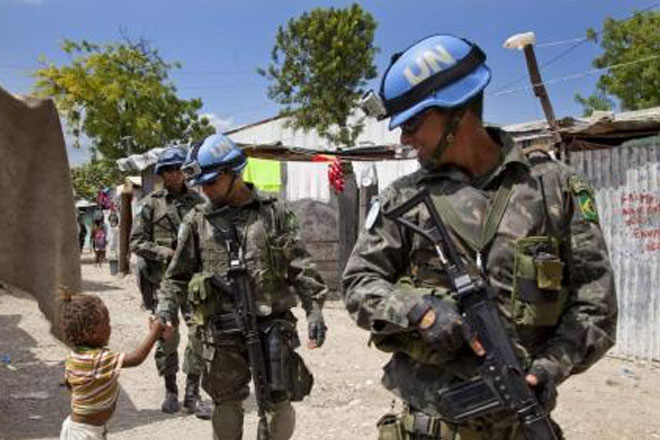 New York, USA — As Haiti approaches presidential and municipal elections, adequate international support was needed to avoid a security vacuum and a loss of gains made towards democracy and development, the Fifth Committee (Administrative and Budgetary) heard on Tuesday as it weighed a substantial cut to the 2015/16 budget of the United Nations peacekeeping operation in that country.

The United Nations Stabilization Mission in Haiti (MINUSTAH) continues to play an essential role in assisting national authorities in strengthening security and stability and building the capacity of national institutions, that country’s delegate said.

As the nation prepared to hold free, transparent and inclusive municipal, legislative and presidential elections, he continued, personnel in the military and police components in the mission should be maintained at appropriate levels to prevent the emergence of a security vacuum and a squandering of gains made so far.

Ecuador’s delegate, speaking on behalf of the Community of Latin American and Caribbean States (CELAC), said the bloc would scrutinize the proposed reduction of $110.52 million, or 22.1 percent, to MINUSTAH’s 2015/16 budget.

CELAC disagreed with any arbitrary reductions without technical justification in the resources allocated to the mission, he said, reiterating the need for the provision of resources to ensure adequate technical, logistical and security support during the electoral process, a position supported by several other delegations.

The Committee will meet again at 10 a.m. on Thursday, 14 May, to discuss the United Nations’ financial situation and its support account for peacekeeping operations.

For the United Nations Stabilization Mission in Haiti (MINUSTAH), she said the secretary-general was proposing to reduce the budget by 22.1 percent to $389.5 million for 2015/16. The number of military contingents was being reduced from 5,021 to 2,370, a total of 268 posts were being abolished and 38 posts were being converted to national staff. Five liaison offices and the regional office in Jacmel would be closed, the mission’s civilian air fleet was being reconfigured and the Santo Domingo support office was being progressively closed.

Xavier Lasso Mendoza (Ecuador), speaking on behalf of the Community of Latin American and Caribbean States (CELAC), said MINUSTAH had made important progress in its support to the Haitian people’s efforts to consolidate stability and the rule of law and move forward on the path to social and economic development. Yet the situation in the country still presented several challenges.

The proposed budget for the mission for the period from 1 July 2015 to 30 June 2016 represented a decrease of $110,524,600, or 22.1 percent, compared to the previous year. CELAC would thoroughly consider the new proposals to reduce the budget with a view to ensuring that the mission would have the necessary resources to deliver its mandate and to help the Haitian government in its reconstruction and development efforts.

CELAC disagreed with any arbitrary reductions without technical justification in the resources allocated to the mission, he said, reiterating the need for the provision of resources to ensure adequate technical, logistical and security support during the electoral process. Community violence reduction programmes and quick-impact projects had proven to be critical tools in working towards sustainable peace and security and they needed appropriate financing, he said.

Conrad Lamont Sheck (Canada), speaking also for Australia and New Zealand, said that the Committee’s decisions should not put at risk the results achieved to date in Haiti, in particular, the ability of MINUSTAH to contribute to the stability and security during significant national events such as elections.

On MINUSTAH, he was particularly interested in issues related to the use of air assets in providing enhanced mobility for the Mission uniformed personnel in order to respond to requests for assistance, notably from the Haitian National Police, as well as the rationale for the utilization of mission aircraft in medical evacuation scenarios.

Denis Régis (Haiti), aligning with CELAC, said his country had reached a decisive turning point in consolidating democracy and the rule of law. Remaining faithful to its commitment, the government had taken all steps to hold free, transparent and inclusive municipal, legislative and presidential elections. Commending the efforts of Haitians and the international community to jointly overcome obstacles, he said the climate of trust bode well for the country.

MINUSTAH continued to play an essential role in assisting Haitian authorities in strengthening security and stability and building the capacity of national institutions, he said, adding that the sustained and dynamic cooperation between the Government and the Mission was behind that positive trend.

As MINUSTAH proceeded towards a drawdown, Haiti expected the Mission to focus its attention and resources on critical areas, he said, stressing the need to consider realities on the ground while contemplating reconfiguration. Personnel in the military and police components in the mission should be maintained at appropriate levels to prevent the emergence of a security vacuum and a squandering of gains made so far. After carefully considering the documents presented before the Committee, Haiti took particular note of the desire to boost regional cooperation towards achieving lasting stability in the country.

He said his delegation was pleased to note the importance the secretary-general’s report attached to the improvement of human rights in Haiti. Any peacekeeping operation of the United Nations was unique in terms of its context, he said, adding that each operation and transition needed to be adapted to the needs and priorities of the host country.

Omar Castañeda Solares (Guatemala), aligning with CELAC, said continued and sustained support from the international community had led to considerable economic and social progress in Haiti. However, significant challenges persisted as the country worked towards national reconstruction and stabilization. It was not wise to proceed with budget cuts at a time when Haiti was facing new unrest and violence and was preparing to hold overdue municipal, legislative and presidential elections. All necessary support must be provided to the Haitian government and people during that critical juncture. As the current mandate had not changed, it was essential to maintain resources at existing levels.

Sérgio Rodrigues Dos Santos (Brazil), aligning with CELAC, said his country had continued to support the implementation of the MINUSTAH consolidation plan during the past year. Encouraging developments had taken place in the country during that period, including a steady decline in cholera cases and the promulgation of an electoral law to hold long overdue elections.

Haitian authorities would require strong support from MINUSTAH, as well as from the country’s international partnerships in order to ensure the realization of legitimate, free and fair elections. A successful electoral process would be essential to enable a continued and sustainable drawdown of the Mission.

Setbacks at the current sensitive stage may risk unravelling the security situation in the country and reversing the gains achieved since 2010. Therefore, it was crucial to adopt a responsible approach to financing the Mission’s activities for the next financial year.

Miguel Camilo Ruiz Blanco (Colombia) stressed that it was important not to undermine the mandate of MINUSTAH and not to endanger the progress achieved so far. Reaffirming his delegation’s commitment that the mission was equipped with sufficient resources to fulfil its mandate, he said the mission should support the national authorities in addressing security challenges as Haiti was entering an electoral process.