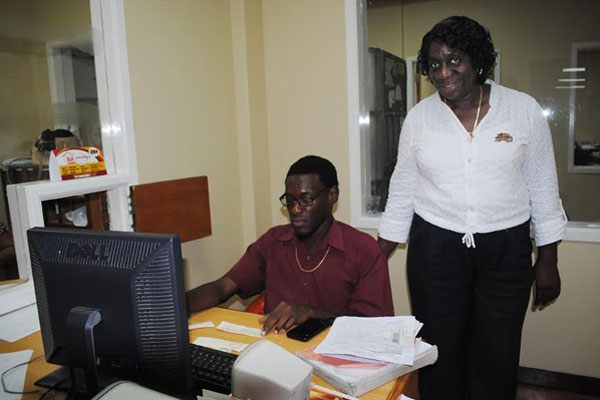 Contribution from PEP puts the GPO on competitive edge

Basseterre, St. Kitts– The General Post Office (GPO), which was one of the first government departments to welcome on board workers from the People Employment Programme (PEP), is reporting the benefits it has received from that association.

The workers came under the Engaging Qualified Interns Project (EQUIP) component of PEP and since their attachment at the GPO they have become part of the family and Postmaster General Ms Sandra Davoren has initially recommended for the fulltime employment of at least three of them.

Seeing the contribution the People Employment Programme workers were making at the GPO, Ms Davoren approached PEP’s Project Manager, Mr Geoffrey Hanley, with the request for equipment that would enhance the work the PEP workers were doing.

“Mr Hanley works in the same Ministry in which the Post Office falls under,” explained Ms Davoren. “As department heads we synergise, and we have good working relationship. I mentioned to him that we have some officers from his department (PEP), and we would like equipment to do more and to be able to assist those workers better.”

According to Ms Davoren, the PEP Project Manager said that he would look into the matter and when he later called he informed her that PEP would help the GPO by donating a computer and scanner to be put into use in the areas where the PEP workers are engaged, and a smart TV for the public area.

“It has been a really good investment to this department,” observed the Postmaster General. “The scanner and computer work together and these were placed in the parcel post section. We use the scanner to input the data that comes in our parcels into our system as well as we use it to input into our system the data we use for parcels that we send out.

“This timely donation has helped us to be able to compete with our competitors internationally, regionally and locally in every aspect of the competition. Our competitors who are in similar business do express mail delivery like us. With the scanners to scan in the information into our system for the packaging, it helps us when the packages come in and it saves time and money, so we can compete and it is good for us.”

The smart TV, which has been set up in the main Post Office hall, will be used to display the services offered at the Post Office and will be a good means of advertisement to show to the general public what they have. It could also be an income generator because at a later date they hope to invite other departments and firms to advertise their services on it.

“PEP has helped to increase our human resource, it has helped to boost our production, it has helped to create a revenue stream for us even though the smart TV is not fully operational,” said Ms Davoren. “I would say it has been a very good way to contribute to our Department. We are very grateful and thankful for it.”

“We have had approximately eight of them and I have already made representation to my Ministry and Minister to have at least three of them fully appointed here in the Post Office,” explained Ms Davoren. “We have seen the good and the benefit that we get from them and we have trained them, and of course nobody is going to train somebody and let them go.

“We really appreciate them (PEP workers) and I would like to say PEP is a very good programme. I am sure they can take the training that we have provided here for them and the opportunities that they have gotten here, they can transfer learning and take it to other places, and we also try not just training in the job, we try to do other training for them that helps them as a person. I say that PEP is a blessing.”

Deputy Postmaster General, Mr Darrien Veira, who has been working closely with the PEP workers at the GPO says that some of them came with challenges as they did not have any work experience, but over the time they have bloomed into good workers.

“They have bloomed into something special and for that we are working very hard to get them on our staff and also get those who are not so qualified get them qualify so we can find some place to put them in the Post Office,” noted Mr Veira.

“In all we appreciate the People Employment Programme. PEP has given us the opportunity to find young different persons in the communities and we are willing to work with them.”