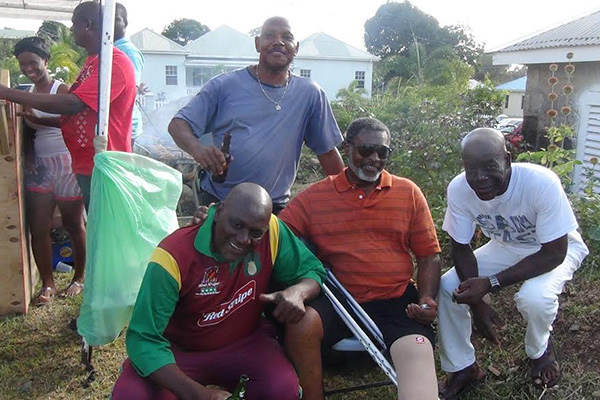 The Cotton Ground community and areas in close proximity showed up in huge numbers on Sunday 16th February in solidarity and support of former well known cricketer on Nevis, Vill Stapleton.

The Calypso Cricket club led out in organizing two benefit matches to assist with his medical exposes.

Stapleton who noted that he never played for the full fledged Nevis team, recalls representing a Nevis X1 versus a team from the Virgin Islands and top scoring with 55.

‘I was a top opening batsman.  I was fearless.  I have taken care of all of the speedsters on Nevis.  I was the first to hit ‘JAGA’ (John ‘The Dentist’ Maynard), out of the Park.  It was a hook shot,’ he said beaming.

Stapleton noted that he never got any further with his beloved game because of ‘fight down.’

‘I remember one day during a trial match, Willet told me to stay in the pavilion because too many Cotton Ground players were already in the team.  I got fed up and just played for Cotton Ground after that,’ he said.

Stapleton has lost a leg due to complications with the dreaded DIABETES and is taking his illness in stride. He was at the games in his wheel chair and noted that when he watched the game, he had a feeling of nostalgia.  ‘I feel like I want to go out there and play,’ he said laughing.

He thanked the community for the fine gesture and also had a message for the youth.

; Stay away from bad company and drugs and dem things. Seek to do something positive with your life,’ he urged.

In the matches played:

The Guyanese team defeated a Police team which included famed former Leeward Islands opening batsman, Luther Kelly who stated that he was happy to be a part of the fund raiser.

In the final game, Guyanese got to 137 for 7 from 15 and the Calypso team which included a number of grass roots players along with former Windies all rounder Derrick Parry, could only muster 83 for 3

Persons bought food and drink at the well stocked bar and also made monetary donations to assist Stapleton with his medical expenses.