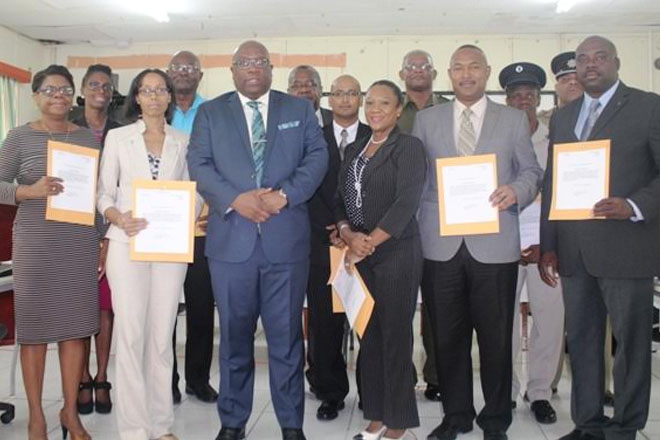 (ZIZ News) – On Wednesday, St. Kitts and Nevis made history when it became the first country in the Organisation of Eastern Caribbean States [OECS] to launch the Criminal Justice Strategic Board [CJSB].

That Board was launched during a ceremony at the Police Training Complex where the country’s Prime Minister and Minister of National Security, Hon. Dr. Timothy Harris issued the instruments of appointment to the 15 members.

Permanent Secretary in the Ministry of National Security, Osmond Petty said “the CJSB is dedicated to keeping people safe,” adding that it will also aim to “reduce and prevent crime, bring offenders to justice, re-integrate offenders into society at a lower risk of re-offending, and utilise its shared resources efficiently and in the Federation’s best interest.”

Chairing that Board is Attorney General, Hon. Vincent Byron Jr.

Sirah Abraham, who is a Criminal Justice Advisor and works with the US Embassy and British High Commission, was instrumental in the Board’s set up.

While speaking with ZIZ News, she congratulated the Government on taking what is described as a “bold step” in criminal justice reform.

When asked how soon the local community can begin to see changes as it relates to safety and security, she said “it all depends on what it is that we’re going to use as the first agenda.”

“One of the things very important in St. Christopher and Nevis is victim and witnesses,” she said, adding that “Those are the people that suffer in the criminal justice system and they are the most important people in the criminal justice system so obviously, as the Board gets together and starts discussing how it is that those issues can be resolved, that’s when change can be made because it has to be a multi-agency approach.”

The Criminal Justice Strategic Board is the first of its kind in St. Kitts and Nevis.