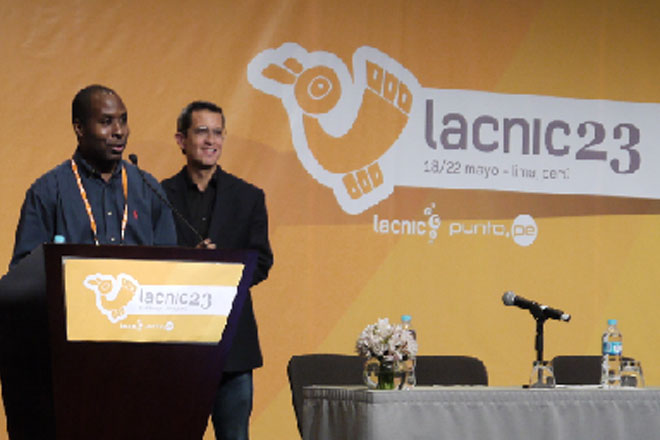 Lima, Peru — Cuba will host a significant gathering of the regional Internet community next year.

The Havana Convention Centre will host the 25th meeting of the Internet Addresses Registry for Latin America and the Caribbean (LACNIC) from May 2 to 6, 2016.

“Havana will be the capital of the Latin American and the Caribbean Internet Community in May 2016,” said Jorge Villa, manager of the national university network at the Cuban ministry of higher education.

The Cuban State Telecommunications Company ETECSA will be the official host of the event.

“This will be the second time that LACNIC flies to Havana for its meetings. It will be a great opportunity for the Caribbean community to participate in a better way in this community,” Villa noted.

LACNIC executive director Oscar Robles made the official announcement at the end of LACNIC 23, held in Lima, Peru from May 18 to 22. The news was greeted with loud applause by hundreds of delegates, who had gathered for the weeklong conference to discuss questions of Internet governance and other issues affecting the evolution of the regional Internet.

For Cuba, it comes as the latest in a series of significant developments in its nascent telecommunications sector. Until 2012, most Internet users on the Caribbean’s largest island had only had limited bandwidth via satellite connection.

The Geneva-based International Telecommunications Union (ITU) ranks Cuba lowest in the Americas in telecommunications development. It says about 25 percent of Cubans have access to the Internet.

In early 2013, the Cuban government opened several cyber-cafes, which have become the primary point of access to the Internet for local users. The Cuban public mostly has state-controlled Internet access in schools and workplaces.

Cuban officials have been promising better Internet service for years but have cited the US economic embargo and political aggression as reasons for its stunted development.

The US rapprochement toward Cuba in late 2014 came with added pressure for the island to hasten the modernisation of its telecommunications infrastructure. The US made telecommunications equipment, technology and services among the first exemptions to the embargo after Washington and Havana announced last December that they would restore diplomatic relations.

In February, Cuba’s First Vice President Miguel Diaz-Canel pledged online access for all, and acknowledged that the country cannot develop without better connectivity to the Internet.

Following the vice president’s speech, there have been several positive developments in the form of digital literacy training centres, wireless hotspots and a project to increase access to fixed and mobile telecommunications services, Villa said.

In March, New Jersey-based IDT Corp. became the first US company to strike a long-distance deal with Cuba since the Obama administration’s rapprochement. Previously, US carriers were unable to make direct calls to Cuba and had to use a non-US carrier for the final connection.

Later that month, a US delegation travelled to Havana to explore business opportunities for US telecommunications companies.

In May, French companies, including telecommunications corporation Orange, accompanied President Francois Hollande on the first visit by a European leader since Spanish Prime Minister Felipe Gonzalez visited in 1986.